‘Totally Fucking Gay‘ is (from what I’ve picked up here and there) a semi comedy band covering real gay issues but in a way that it’s totally over the top, pushing things to the limit that might do its best to heath up conservative minds, in order to inflict internal bleeding. And with that I mean bleeding in the mind and not so much from their behinds.

It’s at times a tough one though, a bit like a donkey’s dong that is hard to swallow, yet I feel obliged to share it with you as it’s a pretty unique conceptual project. It certainly gets very visual, but that’s kinda what makes it so wonderful. It’s a bit like Totally Fucking Gay is pushing it so much with its half spoken / half sung gruesomely visual lyrics, that it might even turn hardcore gays themselves into homophobes; that’s how over the top it can get. Wouldn’t it be great to have someone spin these songs loudly at these fanatic ‘anti-gay’ idiots at their ‘god loves everyone except homosexuals’ rallies? What’s wrong with them? How can we cure them from their unhealthy obsession about someone else their sexuality? Gluing them onto their chairs and play this stuff until they accept their sexual frustration, throw out their conservative facade and jump on another man’s love handle? 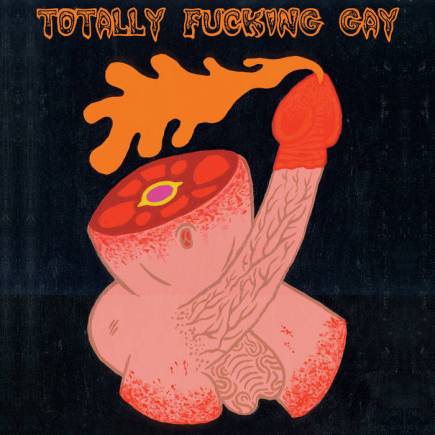 Totally Fucking Gay! (click to go and hear the album)

What’s the fuzz? Gay? I would say ‘so f@cking what?’ But ‘Totally Fucking Gay’ turns it in a bunch of middle fingers pointed to anyone easily offended, and should be (in my ears) considered as the queerest kind of punk(s) in town. I mean it’s not just the visual lyrics, but also the way how it’s brought to you; it’s menacing, ridiculous; it’s as if nursery rhymes have replaced all the words with things that would normally not be really discussed , things that people do behind their curtains & ‘Totally Fucking Gay’ simply doesn’t give a f@ck by giving it to you straight! (!)

It’s definitely a unique concept album and even though there is music to be heard, it’s the lyrics that will make you feel like ‘what? What did i just hear?’. It’s all in good fun, but at the same time it provokes and even comes across a bit psycho at times. It’s the tone perhaps; utterly friendly, cheerful and school-teacher-kind-of-monotone. It is clear that ‘Totally Fucking Gay’ is not something to fuck with, unless you are a homosexual male and enjoy it of course. That’s perhaps something what lacks; there are no songs considering Lesbians over here, it’s all about the dick lovers among dick wearers.. So if you are a lesbian, you better start making your own protest record, I mean ‘So Fucking Gay’ got some balls, give us the thing you have to offer! Get married!

So no, no rebellious girl things are here, it’s a typical men’s world over here. It simply can’t get any manlier then this album though, it’s an album of assholes, hairy sacks, behinds being filled (and not the ones of a female) , and the exchange of cockrings at a gay wedding and lots of other in your face details that might be comedy, offending, funny or simply material that will arouse or turn gay people straight. It is perhaps a political piece, satire, a middle finger to the conservative homosexual haters that still roam around in the United States of America; yet i doubt that any homophobe will be listening to ‘Totally Fucking Gay’ to be shocked or disgusted; they will be listening with full attention, making notes and fantasizing away…

these smart asses might consider it as propaganda material to put the flames of hell up and go on a hunting spree in public, while at home sitting on the back end of a plumber, a broomstick, screwdriver or perhaps even on another homophobe’s ding dong. (All in the name for research of course!)

There are three videos around, basically good material to put the word out and get people interested in the album(s). I say album(s) because it seems that there are actually two of them. ‘The penis pianist’ (mind you!) & the self-titled one… Both follow the same concept, but both with different songs and in your face lyrics. I happen to like the penis pianist (mind you) the most, cause wouldn’t it be great to have a pianist playing sold out concertos with its penis? It might be a little hard, but a solid execution of a composition of Beethoven would be nice. But, no… That’s not on the album, but they are easily played together, making enough time to enjoy (or freak someone out).

“TFG is a pop grindcore comedy project first and foremost. I want people to laugh out loud when they hear this shit. However, TFG’s secondary purpose is to be a homophobe’s worst nightmare. We’re like the NWA of homosexuality. We take all the things that conservatives fear about gay culture-and instead of downplaying them for societal approval; we amplify them beyond caricature.”

So yes, don’t come here to hear romantic gay love songs; the content of these songs are much more to the point. It’s pretty gay!