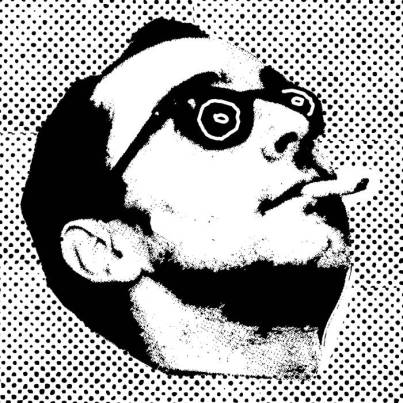 Smart advertising campaigns always did their best (and probably still do) to make smoking a cool and sexy thing to do. And there is something about it, someone who sucks on a cigarette does look a bit more like a John Wayne or a Audrey Hepburn. This unexplainable cool factor of a smoker has made its way into music, it’s harmless for the lungs to listen and has nothing to do with you standing nervously outside a corner smoking a few cigarettes in the pouring rain because the health club decided you couldn’t show your cool smoking skills inside among the jealous nonsmokers.

Now with the music of ‘The Smoker’ you can bring that cool edge of the ‘don’t give a damn’ smoking look inside, nobody will complain and big chance that even the non-smokers would be happy to pick up second hand sounds from the smoking hot music..

The Smoker’s music is played like a cool ruler, automatically making smoking sexy again… Long Tall Plastic Cigarette seems to feature a classy old trumpet to be exhaled smoke through, when no other smokable items have been around. It has the vibe to wear vintage hats, suits and buttoned shirts. Something that smells like a old school record spinning around so much that the whole turntable started to smoke.

Kung Fu Gordon has the classy swinging anthem melody with delicious shakers. It sounds as if it wasn’t actually a recording from 2010, but from years long passed. This sound and feel of the smoking hot release makes me think of an authentic case of raw layered pair of smokers’ lungs. It has something of ‘who gives a flying f#ck’ attitude, something from the black and white movies, something Wild West, something with not only smoking cigarettes but also a time of smoking guns.. But with The Smoker’s cool music by your side, you’ve got nothing to fear; but lots of reason to start smoking again!
http://whitebreadmexicanproductionuniverse.bandcamp.com/album/smoking-music-by-the-smoker

1 Response to THE SMOKER – SMOKING MUSIC