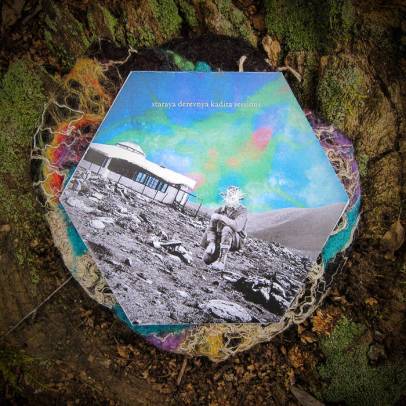 I’ve been blown! It might not have been the first time, but this time I’ve been blown away!
This is such a great sounding album, so original and unique. It’s done by a huge group of people, (Gosha Hniu – percussion, toys, objects, cries and whispers, marching band kazoo, ac.guitar, shruti box , mbira Maya Pik – synths, melodika , percussion Ran Nahmias – chello, theremin  Urik Borodin – el.guitar, violin Lior Lerman – cries and whispers  George Priymenko – ac.guitar , chello , percussion  Grundik Kasyansky – feedback , brushes  Andrei Smourov – cries and whispers and a choir consisting of Matthias Moos, Jonathan Shohet, Sabina Tupan, Tom Shtasel, Lior Lerman and Hniu)  but surprisingly the material that they had created together sounds so in touch that they must have been on a similar line of dense friendship to create such great sounding material.

The content on this album is extremely intensive and will totally surprise you in its unexpectedness. With ‘Hram’ it starts with a fanatic frantic yell, which might be perhaps a cry for help, or someone performing so passionately that it seems to have its soul on fire and you are the only one who will be able to hear it. Are you a fire(wo)man ready to help?

It’s captured in such way that it invokes a complete thrill to hear; The intensity of the voice is surrounded with the most original and unusual density in music form. Think rhythm, think a absolutely at all odds singing choir of cheerful ‘lalala’s’ in a superb psychedelic swinging soup that feels a bit like its is done in the futuristic seventies all brought to the now to wow all away.

It’s intensive, passionate and highly original!
Can’t say I’ve heard anything like it!

Then there is ‘mem’ which start with what sounds like kitchen equipment being thrown on the floor as the introduction. It’s then the never failing sound of a hot boiling water kettle that will guide you through another high quality work. This one is very different from the previous heard one, going for an swinging laid back hot n groovy swing of a track. It has everything to make people dance feverishly in a way that reminds of Manu Chao but in punk form. The track gets more intensive and thick towards the end; really delivering a spectacular end to shake your butt on.

Then it’s time for some long time safety, and what can deliver that better then ‘Chasity’? This track is intensive in another sense of the word, it’s a guiding work of softness with a feel-able underlying rhythm and warmth created by experimentalism, folkish sounds and strange electronic mystification. There is this voice who sings in a way that fits the surroundings, as if it’s an instrument itself guiding you through the chastity session like a soothing friend in sweet but bitter times.

After a while a kick appears and the music totally starts to dense it up in such a way that it will give people the shivers. Synthesizer material will play a strange melody of sensation, crumbling artistic rumblings that feeds the pressure of the whole chastity situation and it feels as if angels sing in the back to stimulate some sort of relief. It’s a bit like an orgasm in music form. 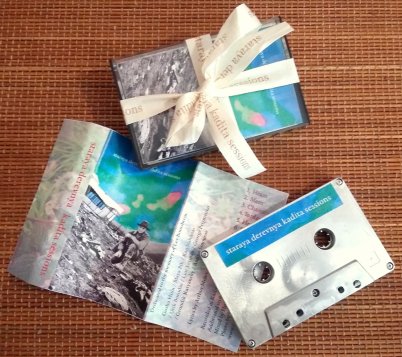 …and a feast for the eyes aswell!

Lordan’ is another originality that you simply wouldn’t expect to hear, but really should hear. This comes with a free spirited chill vibe with a super funky tight beat, a gorgeous kazoo as it’s main trumpet solo with great sounding vocals. Fans of French band ‘Air’ might really love what they would hear here, it has a similar flair while being totally unique and graciously spaced.

Then there is ‘Het’ and it’s the most angry sounding on the release. To me it feels as under the pretense of groovy percussion the band leads us for a sneak peak to see the flames of Hell from a safe distance. It’s a nice reddish glow and production wise it’s as top notch as ever. It’s a intensive journey of crunchy guitar, thick bass, a wary heavy deep voice that crawls up on you like the gatekeeper himself showing you the party that is Hell with naked dancers in these flames, dancing and suffering forever the pressure of flesh burning. It’s a very amazing sound when you are completely in it, the music screams like demonic cries and all this with the never ending percussive groove to keep you from getting lost. Out of this world’!

The next one is ‘Sages’ which comes across as the sound of bitter sweet, a song of passion and pain that has these tones that made me feel like its a song that fits the survival of Hell. It’s a powerful one, with a unexpected fall from stability that feels as if the ground opens under the listeners feet for a insane heaviness that will put the pressure on ones heart. Knives are brought out, lava burning, the ground is shaking and a poem is read with the only thing my ears could understand was ‘in the land of milk and honey’. Super intensive!

Kadita is spreading the groove with percussive percussion, a jolly but dark glowing melodic mellowness and a voice that feels as soothing as it sounds lived. There are all the instruments together creating a psychedelic loop in which you can feel yourself being taken over by the spirit of the lizard king. The rhythm is unforgiving, smooth and hot with all the favorite things showcasing itself to give the brewing melody the nod of approval. Psychedelics at its finest! I Highly recommend to check this album out at the following link:
http://weakiediscs.bandcamp.com/album/kadita-sessions
<KN>