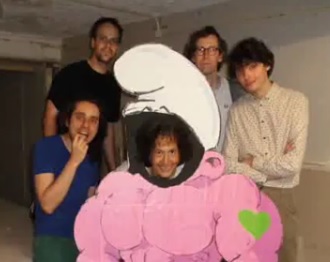 At a time that authentic rock n rollers from the Netherlands had becoming almost as rare as the sightings of the well-loved Dodo, Dutch rock n roller Ricky De Sire is claiming up his space as one of the remaining originals. Rock n roll is in his blood, streaming around through his veins like lush rivers full of energy and soul.

As a last man standing strong he involves (like a wise elder) the colorful youth of his surroundings to jump on board and catch that original rock n roll virus in the hope that the magical sparkles jump into the next generations to come so a new generation of Dutch rock n rollers will rock deep into the promising future. With all the enthusiasm in Ricky De Sire his bones and character the flames of this genre and life style are guaranteed passed on & with his newest single it’s easy to see why!

Ricky De Sire rocks out a very nice sounding Dutch rock n roll tune that with the help of his rocking friends sounds as sophisticated and well done like only a true rock god could have done. The artist sings his heart out and gets every inch, every tone, every word and sentence righter then right. The music is super tight, without losing that spontaneity that the rock n roll vibe needs to survive and sparkle; it is truly sounding like it has been done until everything was sounding correct and perfect, to secure the legacy that is of course Ricky De Sire.

As we speak the media has also smelled the success of this dodo of true Dutch rock n rollers & he is (as we speak) being followed by a camera crew that are hopeful to jump on board of Ricky De Sire’s popularity. Not sure if it will result in a ‘the osbournes’ kind of reality show, but somehow it might be the hit show / documentary that will make people want to watch television again. But seriously this isn’t about fame and fortune, this is about hands waving through the air, about a life style and music that you should be able to feel in your guts.. Even if you aren’t able to understand one word of the Dutch language, rock n roll music is such a universal language that shouldn’t be any problem to get you going into ‘rock’ mode.

Another facet of the real authentic Dutch rock n roll scene is DIY, and with this latest single Ricky De Sire even crosses off this task by not only being the creative genius of the tune, but also having made the video for it all by himself! Seriously, if you look at it you just know that there is a real creative video director hidden in Ricky’s rock n roll heart & now happily jumped out to do his own thing! Ricky De Sire does everything for the sake of the music and that’s why this new tune is simply securing this artist legacy as a Dutch rock n roll god!