The Monk by the Sea – Soundscapes V 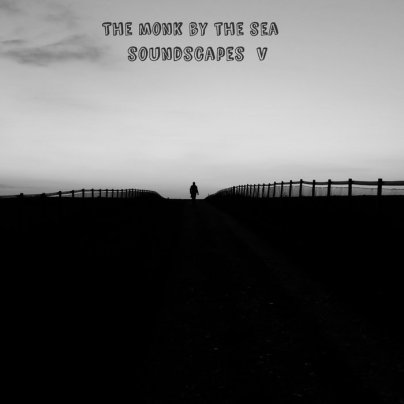 If you had been in touch with the music output made by the monk by the sea before, you probably know that this monk loves giving you ambient to chill out with. And surprise, above surprise this latest release named ‘Soundscapes V’ is no exception.

Expecting harsh noise, breakcore, black metal, happy hardcore and power puff folk would be an idiotic thing to do, as this is a monk in sync with its surroundings. See, a monk by the sea will have the sky above his head, the sand between its toes and the sea to wash his robes… All things that shouldn’t get anyone stressed out unless you have a phobia for any of these things, other than that it’s easy to imagine that these elements stimulate to generate indeed more charming ambient music.

But, it seems that the monk had been traveling a bit, so don’t think an album like this will sound like any previously heard ‘monk by the sea album’. It starts though with a recognizable scene of indeed the pretty sea calmly arriving and pulling back (and arriving and pulling back in petite but repetitive ways..) and lovable minimal ambient music floating on top of it. It’s sounding like a sunny day at a beach without anyone else around; pretty relaxing if you’d ask me.

But here you have it; proof that the monk by the sea not always stays at the sea but is (for music sake?) also willing and able to travel around a bit. Or perhaps the monk is still by the sea and has a mountain view at the other end, or simply imagined mountains, as the following track is indeed ‘mountains’. It’s a dreamy happening, very calm, yet somehow it feels like its adoring mountains with the strings of a humbling guitar that goes all mystified on me. Somehow I imagine the mountains to have lots of trees, standing firm in that blue sky like a big inspirational source for music making monks heavily into ambient.

Then it’s ‘a clear night’ which basically means that the monk by the sea could be anywhere when making this pretty and soothing material. Somehow I imagine him by the sea though, perhaps with a campfire on the beach, warming his hands while adding little left over tree branches into the flames as the music plays. It’s a very smooth and positive sounding ambient work & in all seriousness it sounds indeed like a perfect clear night; pretty much appreciates them when they appear, especially in music form.

And then there is ‘Lake’ which probably means that either the monk by the sea had been dreaming of being by a lake, or actually has next to the sea a lake nearby, or perhaps traveled to the lake. Whatever the situation it is clear that the lake (or thought off) had inspired the Monk by the sea a great deal, as the music seems to be one full of respect and adoration for such a magical place that is a lake. It doesn’t sound like a lake i remember from when I was young, full of people yelling, swimming and surfing; this is a lake pretty much one with nature and if there are people there it is probably only the monk by the sea overseeing (and enjoying) the view of it all. The music is enigmatic and like all The Monk By The Sea output something moving, soothing and wonderful in its ambiance of impressive beauty.
https://themonkbythesea.bandcamp.com/album/soundscapes-v
<KN>