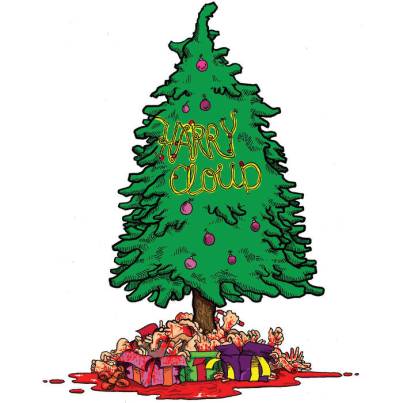 When someone French describes Harry Cloud as a genius, you better take it seriously. Full of paranoid thoughts and dressed in school uniform I dived into this Harry Cloud’s After School Special and could only say that the ‘genius’ comment was well deserved and perfectly placed… What an album this is!

It started with ‘Graveyar Duncle’ that knows exactly how to stick its fingers under your skin to gain its full attention. Drums and a piano bit that sets the dark tone of a mentalist at work, something that comes out with surprising surprises in the mixing and wordily singing. Every word is dense, as if Harry Cloud has been emotionally ruined but also sees the humor of this situation. It also helps that his lyrics are confirmed by a choir that sounds like it’s coming out of members from a talented group of muppets show’s throats. If that doesn’t sound genius to you, than good luck finding something that does. Harry Cloud ‘goes through things’ like a human being, but expresses it in a very original way!

Than ‘Let’s Go Circles’ which shows us a completely different side of Harry Cloud’s work. The songwriting is smart with lyrics about cooking, going into circles and selling donut holes; but it’s the way it’s brought with the music and vocal style that gives this one something punk that at the same time feels nice and cozy. I really like it, as it made me sit up straight in the classroom spooning it all up as if a very interesting teacher had come up with an even more interesting and fun lesson to learn. To top it off there are also pretty nice guitar works included, it’s fairly loose bringing back the good riffs at after school edutainment.

Then there is the lyric-less ‘Your Mom Is Dead’ which is like a happy musical middle finger in which fanatic and tight drums come nicely together with a expression on the guitar that will say ‘fuck you and your mum’ in a way that Harry Cloud is shitting all over your pathetic attempts to be cool… Thumbs up!

Harry Cloud then comes with the surprising ‘Gravel Pillow’ which is raw and sound completely different again. It’s like a groggy rum drinker had set its music brain on fire while still being able to be sentimental. The music is rocking, the guitars are giving reason to enjoy funkiness that are fresh and full on & then sensible again; it’s like a duet between rage-folk and sobbing in a corner; and it sounds awesome!

This concept is going a tit load further in the rougher ‘Janie’s Got A Gun’ this is full of darkness, and gritty dirt in full dense form with everything shaking and banging in a fanatic way. But here too there are some sweet and polite contrasts, bits that sounds like a music box with a screwed up ballerina inside that then gets thrown on the floor for a great contrast of more rampage in music form.

Then there is the hit named ‘Away’ which is rocking in such a way that it should have been picked up by any radio station across the world and played the hell out of it until the record dies from frequent playing (good luck with attempting that with an mp3!) It has something that I think David Bowie looks down from his black star and gives it a nod of approval.

The last track is the one that probably is made to get the place rocking in a mass movement in which a devilish Harry Cloud speaks it’s word like a voodoo person and the students attending the after school show will be treated with a freaky freak show in which nightmares are implanted for them all to enjoy at nappy time. The music grows into colossal material that feels as if the devil is assumed and we can march with its help to the clouds of heaven to occupy the sky and continue the party there! The wide guitar tones are very bright and uplifting as if we are balloons going higher and higher! Awesome!
https://theoriginalsinglemothers.bandcamp.com/album/harry-clouds-after-school-special
<KN>