Gutter Strategies – I Am Death 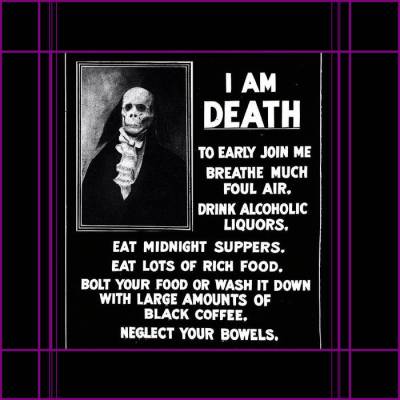 Gutter Strategies ‘I Am Death’ sounds unlike being dead; quite alive and noisy. It’s certainly not an album of graveyard ambient and silence. It starts with ‘Declaration of Nothing’ which might perhaps suggest to have nothing to declare, but comes across as someone’s rewired chainsaws attached to electric grass mowers that have actually a lot to declare. The sound is as if a Satanic preacher is standing on top of this grass-mower-chainsaw-machine with a microphone and direct the strange object with words my ears not understand. I know that might sound silly but I could just imagine the speaker being moved around while chopping grass and trees at the same time; heavy gardening!

The next track is ‘I Am Death’ in which the words of the one who speaks is much more clearer, even though there is turbulence in the signal by the adding of noise that might enter your ears in such a way that it will leave quite some damage. Especially the high sounds are good for a after beep that keeps on ringing. Luckily the track transforms in a raving scene in which we can hear a raver clearly having lost not only it’s hearing capability but also its mind. Listening to someone who is dead sounds pretty much alive!

Another cool attack on the ears is ‘The Sacred Sun Within’, it is cool because even though the listener will be in pain while listening, it is coming in this alternative ‘we will rock you’ format. It’s very noisy, but yet it has something catchy; or shall I say scratchy as the noise is probably scratching your eyeballs out from within. Oh well, who needs ears and eyes anyway?

Of course ‘Constant Fucking Pain’ will express and enforce more pain on the unlucky listener. And indeed it comes with a lot of noise, and this time there seems to be no real structure to get your inner Freddy Mercury of noise out, instead the furious noises is having a blast of a time and if you play it on extreme levels you could actually feel your own skull cracking from it. I guess that will be enough to deliver more constant pain even when the release is long gone and over. Can you hear the artist scream? Or did your hearing system already give up on life?

1 Response to Gutter Strategies – I Am Death