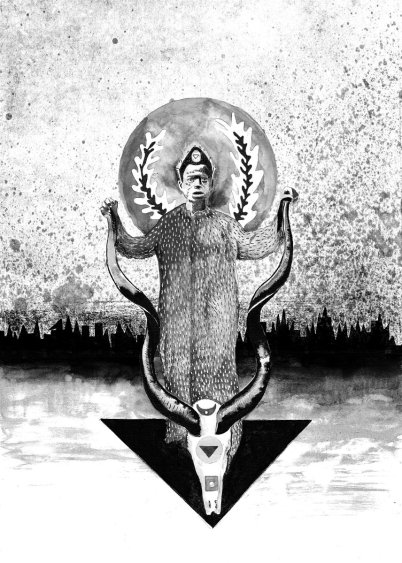 Never thought the day would come to hear a split between a certain Scheerling and Thaumaturgist, but as the day is today, you might as well join me. The work by Scheerling named ‘Vertoeven LVI’ is nothing dirty for your ears, but instead comes as a synthetic soothing track that might find joy into becoming distorted. This might break the smooth effect of the ambience as it functions perhaps more as a ear opener than a music-based tranquilizer.

After this the music becomes a bit more subtle; an audio play for the ears! Strange mysterious warmth meet with recorded sounds that on their own seem to be manipulated to join the special effect parade. How it makes me feel? Like having a fever while working alone in a kitchen dropping large iron kitchen spatulas on the dodgy looking floor. I don’t know; it makes me feel like the fever had kicked in hard and I might have started to trip from loneliness.

The music then sets into another section. This time it feels all subtle and pleasant; Warm synth material that calmly nibbles along the stream. Soft bonus sounds that scratch sweetly or bubble up a bit in a very polite way give this part of the work a bit more depth. It’s pretty minimal, yet not too empty either; it’s a balance that balances things out as the music plays almost a folkish abstract expression through electronica. If you have no idea what that means; join the line as not everything has to make sense over here or in the actual music. I must say that this is my personal part of the Scheerling contribution; nice and soft, yet bubbles along in a movement that is warm and pretty. In fact the more I hear; the prettier the work evolves, creating a climax that is sensible in surreal serenity. Melodic synth pads waving through each other like its a love song between two intelligent dolphins that refrain from making noises…

Then it’s time to say goodbye to Scheerling as then it’s ‘Thaumaturgist’s Mysteries van de Droom to do its thing. It starts pretty different in approach as the previous artist; going for rhythm in a playful session that somehow in my mind sketched a scene of water spiders waterskiing while the clappering music supports the spider water sports in a sportive awkward fashion.

With electric music material that is groovy, funky and at the same time pretty, it is difficult to decide if it’s to give it a go at the dance floor or just sit back and enjoy the intelligent progression of well knitted funkiness in electronic form. I guess it’s possible to do both; although I must say that wobbling with the toes and absorbing the mellow melodies through the rhythmic session is also a recommended activity. It’s really nice how the material seems to evolve, change and gets surprisingly more and freakier. Perhaps even freer!

The more the music plays the more you got that urge to move, but before going into the crazy zone it’s good to tell you about the next part; even groovier! A bit in which a rolling drum loop with sweet laser like backdrop is simply making it very uneasy to stand still and act cool; this is the rhythmic material that will bring people together, dancing uncontrollably on these nice rolling rollers and spread love along the way; Something that easily can be traced back into the pretty melodic times that fly around it; like a mysterious muse playing the right things at the right time.
https://viezecocktails.bandcamp.com/album/vertoeven-lvi-mysteries-van-de-droom
<KN>