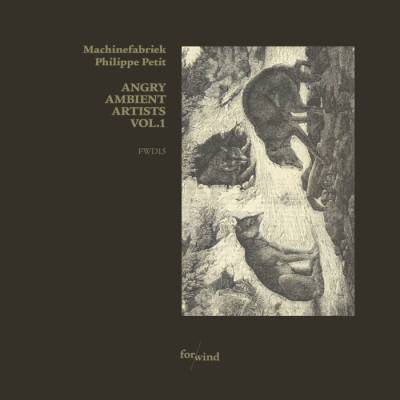 On side a there is the very angry ambient artist named ‘Machinefabriek’ with an angry ambient track named ‘Graniet’. The high pitched beeps do certainly hit a nervous angry nerve in my very angry ambient brain, but as its part of the thing to keep the ambient angry; I would say it’s working pretty well! The angry ambient track evolves and becomes a soundtrack in which sounds and silence are interbreeding with noises. It’s angry but also fragile; making me think that ‘Machinefabriek’ might have done a firm amount of anger ambient management and this might be the result of a ‘music therapy session’ to get the anger under control. It’s all crispery, slightly poking under the skin to test the listener’s boundaries of tolerance between anger and ambient.

The angry ambient artist named Philippe Petit delivers an angry ambient piece named ‘In Corpus Voluptas’. There is a similar vibe of organic soundtrack material to be heard. We can hear snippets of trippy scenes, birds (not sure if they are angry birds..) and pretty satisfying synthesizer material to smoothen the anger ambient out like lubrication for the mind. Of course angry ambient will involve bits of angry avant-garde, a yawning sheer of stretched out ambient anger in psychotic forms, something that even though being angry in ambience, it still seems to be under control. While this artist rings the dooms bell and angry souls seem to be flying and moaning around the ambient atmosphere, It’s good to notice that both producers have been hitting the anger ambient concept like a soft nail in a comfy coffin.
https://forwind.bandcamp.com/album/angry-ambient-artists-vol-1
<KN>