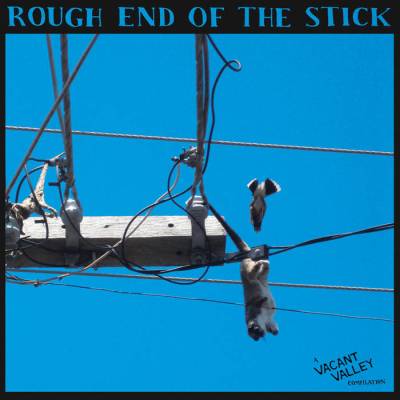 Vacant Valley might be a label named with a suggestive name of being a vacant valley, but if you visit this label you will notice that it’s not so vacant as the name suggests. Even this single compilation is completely full with bands and music. Might this be a good place to get to know the style of the label, the spot to explore the business of vacant valley? Well it just might be! Let’s go!

This compilation starts with a track by NTH WHEEL that will get everybody talking. It is okay as when you play this loud enough you probably won’t hear them. It’s for the best because the juggling guitar work and the vocalist who yells and yawns at the same time is for sure material to fill up the room on its very own.

THE BUNYIP MOON will confirm once and for all that gravity sucks. They do this by forcibly taking is down to the ground by a noise rock thing that has a melody that seems like to its spraying us with a blanket of hiss. Yes, I said hiss; not piss. Although urination is always good to drop in such a release; making the review more credible.

No pink, no red, no blue but up next are WHITE WALLS with some ‘long minutes’. They play a cozy fuzzy fuzz of guitar rumblings with rumbling drums; it’s very expressive, almost like a wall of sound, probably best experiences in real life! You can hear the energy in here hinting to jump out, just wish there had been more longer minutes to hear as I feel they might provide with that feel of lifting off at a certain point in the lengthy minutes.

Then it’s time for a nice juggling song by someone or something named FULL UGLY. The name makes me think of someone who doesn’t look very appealing, maybe Jabba the Hut with a guitar and a microphone; but luckily the voice doesn’t sound at all ugly and the song is rather light. I wouldn’t mind to hear this while just hanging around, or doing some things. Hell, in fact I might even listen and write about it!

But I must say, I rather write (and hang out) more with this tune named ‘semiotic decay’ by GO GENRE EVERYTHING as it is hilariously crazy, might as well say it’s a bit nuts, cuckoo, or simply say it is good ‘fun’. The highest potential that works on the laughing & smile muscles is the hilarious singing over here; it’s like a choir from a lunatic asylum all singing in peace and harmony as if they are just castes a part as members of the muppets show.

What do you see when you see your reflection in the sea? I certainly would see my own face, but how about you? Would you also see my face, or might it be your own one? I guess when erasing this it might not make a lot of sense, but if you hear the lyrics in ‘deep sea diver’ by POPOLICE it might.

If you are searching for a super star in the vacant valley then seek no further as SUPERSTAR should be by definition a ‘superstar’. This superstar comes with a track named ‘heavy nettles’ that might be heavy in its title, in reality it’s like a kind and gentle flow down the stream. It’s not a long session, but you know what they say; it’s not the size that matters, it’s how you fill things up… (or do they not say that?)

Then this strange thing named WHERE WERE YOU AT LUNCH pops up with a delicate crushing rambling something that is named ‘before we fell’. It might be recorded before they had been falling, but it sounds as if they had been falling and stumbling with their instruments, and even the sound engineer rolled around with its equipment.

after that we can meet the most important members on this compilation of Vacant Valley; THE CLITS. Normally people like to stimulate them, but here the clits will stimulate us with a very happy clapping feel good sunshine tune that listens to the ‘zoo song’. It’s as happy as going to the zoo; monkeys throwing poop at you, ant eaters piss directly in your face and a lama spits on your sandwich! Luckily there is lots of sun and you are in a good mood!

One of the more alcohol loving names MAD NANNA brings two kids to the party, it’s a nice rumbling of guitar playing, lo-fi galore and mad nanna singing. Somehow I could imagine cigarette smoke when hearing this; might the kids health be affected?

I like that the 3rd person by POP SINGLES has indeed something poppy, it also has something speedy, something raw, something that is played by mouth, fingers and hand coordination & probably with instruments too! It’s of a short and compact size making it perfect for radio play!

One of the more menacing tunes on the vacant valley collection of tunes is ‘some’ by
DANE CERTIFICATE. It probably is my favorite track on the album, I just love the honesty of the track; with great lyrics it basically informs you some information.
It’s a bit short but just enough to get some good enthusiasm going on.

I’m not so sure if this is the track that the compilation is titled after, but schtick by JOUISSANCE certainly got that ‘stick’ feeling. With a female voice battling the loud music (and winning!) we can be sure that this is not tea time music, but something for a revolution, tomahawks getting shaved or glued back on & the established establishments will be ripped apart with schticks !

Something more sweet in an energetic melancholic way is this ‘turpin falls’ song by THE STEVENS. Somehow it’s poetic, romantic, loving… You just want to cuddle THE STEVENS that’s how friendly and nice they sound. There sound is a bit drowsy, dreamy and with the right amount of caffeine.

The next Vacant Valley associate WOLF 359 brings a track named ‘covenant’ which sounds fairly different compared to all the others. We hear someone talking as if it’s transmitted through the radio, electronic programmed beats and a well-played bass with a muffled guitar rocking in a minimal way. I don’t know, it’s like hip-hop without the rap or actually being hip-hop. I love the sound of it, very muddy and yet not dirty enough to make you want to clean your ears.

The one who is known over here as PRONOUN brings a very vast amount of awesomeness with the lengthy titled track ‘we said to him gently, “Hail of bullets”’ which is like an orgasmic wall of sound, super thick warm, manic intoxicating and all absorbing! To me this is the track that functions as a vacuum cleaner it sucks all outside sounds or music up and replaces with pure thrill. Digging this big time!

Last but not least is a more classic party killer by RATSAK’s stockpiled which sounds like a middle finger, a filthy one, with dirt underneath its nail, pointing at all directions while someone pukes over your head as if it’s been an ashtray! I don’t know if that sounds like a happy end to you; but it certainly is one in Vacant Valley!
Get this compilation over at the following link:
https://vacantvalley.bandcamp.com/album/rough-end-of-the-stick-compilation-lp
<KN>