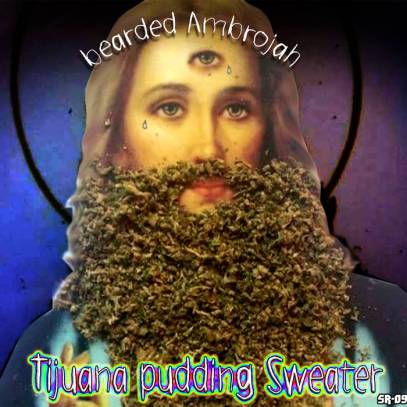 This album is a bit of an weird one; its mostly danceable material but it also gives me the feeling that we are dealing here with dancing straight into the acceptance of a cult of personality. Might this personality be Bearded AmbroJah? It is just a feeling but as soon as the release starts you can feel this personality’s presence, splashing itself into the dance funk extremities in which ‘earth girls’ dance under Bearded AmbroJah’s influence. You can imagine their heads spinning as your own heads spins the same way on images of tambourines being slapped on hips, and a sensual swing makes the head go loopy.

When fully captivated in to Bearded AmbroJah ‘s world AND this release, the Bearded AmbroJah brings out the bongos, swiftly flops out words to introduce an unescapable piece of dance music that smells of ‘cult music’ all over it. When dancing or simply being exposed to this work, it’s easy to feel your own eyes turning around in hypnotized circles while the cult-leader freaks out in its own self love.

Ofcourse under the pretence of having a good time it’s easy to be triggered to join such a groovy cult, especially when guru Bearded AmbroJah brings out the necessary wicked baselines that are irresistible fun! Before you are aware of what is happening, the master of manipulation will bring out its private part and a knife for full on cult initiation! Let’s hope you are hypnotized deeply as you don’t really want to know what the knife and private are teaming up for… If you wake up dancing on a dancefloor with a smile on your face on top of a puddle of your own blood it might probably mean you have successfully entered full cult membership.

More smartness comes with Bearded AmbroJah delivering the knowledge that followers want to hear in ‘9/11 was an outside job’ this is has this bizarre housey vibe, a female vocal, beats and rhythm and synth sweetness. It’s good to be a member as who doesn’t love crazy house music with a psychedelic psychologic twist?

Last track seems to go back in time, in which Bearded AmbroJah was still a student on a highschool, already disturbed, smart, twisted and excellent in character sure should have known that the young Bearded AmbroJah would grow up to be the Bearded AmbroJah that got a whole crowd of dancing followers in the Bearded AmbroJah cult. Or well, it isn’t proven of course; but that’s how the music comes across; dancey cult – music!
http://shaftrecords.bandcamp.com/album/bearded-ambrojah
<KN>