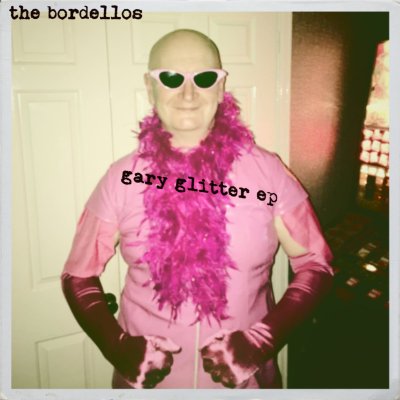 The Bordellos is one of these bands that are very self-conscious and aware of the ‘now’ that musicians are living in. You simply got to love them as with them being so aware of the fact that they make music in a time that the music industry is more death then alive, they simply use a lot of wit and humor in their songs that mostly gets ignored.

And yes, sure, not everything will ‘row your boat’ that the Bordellos put out; tastes are different and with them putting mostly the middle finger up towards any attempt of commercial success, they tend to fall outside the radar, slightly hitting the surface of the obscure parts of the underground. But, no! Not anymore! As whatever you are into music-wise & whatever you had been listening before; you got to hear this EP!

I’ve heard many of The Bordellos their output, but this EP is one of the ones that burst my enthusiasm into a frenzy! It contains four very witty tunes that almost hang towards social comical commentary, with the use of observing that you normally would only expect from a stand-up comedian. It is clear that ‘Gary Glitter’ is the obvious hit over here. A song that you really should hear as it’s not only good music, it’s also pretty much hilarious! It covers the whole thing that fans of Gary Glitter had to go through when it turned out that the rock star in fancy costumes was an actual pedophile. It’s hard to admit that you like the music or style when it’s done by a pedophile and even harder when that pedophile is Gary Glitter.

Another song that stood out for me on this collection of tunes is the one that cleverly highlights that we are the download generation. A generation that doesn’t pay for rock and roll records and that means musicians of this generation will have to work their whole life scrubbing toilets, filling up products in the supermarket or any other job to get food on the table. The Bordellos intelligently get philosophical by imagining the Beatles and The Stones trying to do their thing while being obscurities in the free download generation. It is not only fun but it is also food for thought!

The lyrics are smart and fun, but also the actual music is something to write back home for. The Bordellos really keep it rocking for the most part (the disco pants song at the end might be more something to hear in bowling shoes and a twirling disco ball suspended from the ceiling…) the guitar is so nice and full. Very rough and tight like a solid rock that keeps on rocking. Big up to the person responsible for mixing these killer tunes, and now it’s up to you (killer potential listeners) to tune in and enjoy this fun and smart EP! You won’t regret it… Unless the Bordellos turn out later to be pedophiles… 😉
http://thebordellos1.bandcamp.com/releases
<KN>