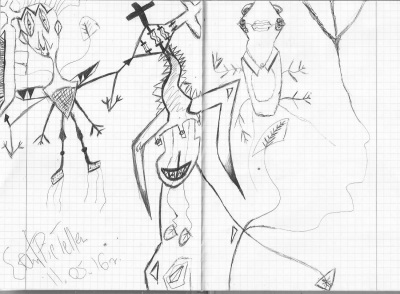 Mhz_ brings in the dead drone sessions that consist of very lengthy dead drones with all the better aspects of the 8kbps bitrate encoding. It’s the art of giving sound as a palette that a listener can pick up the deadly colors from and start to color the things in with your own fantasies, creative ideas or other random thoughts that might (or might not?) pop in when emerging yourself in the dead drone.

In that case it might be close related to the HNW minus that here all is comfy and warm and there are actual sound aesthetics to be heard and captured. It’s a blank piece of paper with suggestive patterns on it that you can use to create something. While listening to the one hour of ‘shi drone’ I had visions of being at a busy birthday party, people chatting, gossiping and all at the same time. But I also could hear the car-theme from night-rider popping through; it’s all up to you which part of lossy sound you will focus on & what your head implies what it could be in fantasy form.

Moldbrane is also a very lengthy one but is less stable in its deadly droniness, creating a more engaging work, perhaps for anyone who needs a bit more encouragement music-wise to get the imagination started.
In my vision I imagine mhz_ shaking a pack of chocolate flakes for over an hour, along with a choir of whistling and singing dwarf ready to go and dig out diamonds at their mine. For a dead drone it seriously has a fun and alive aspect to it.

Katalogs is coming across a lot more wilder, as if we jump in the middle of a mental breakdown in which freaky party goers are all angry and excited about waiting to long in the line for their favorite fun fair attraction. It’s very wild and drunk how this dead drone is dealing with itself. I can hear moaners, angry ducks and choirs of the mentally unstable hanging around together in the certain stableness that the dead drone has to offer.

The shortest dead drone (a little bit longer than 27 minutes) is the one all the way at the end. One that sounds more soothing, everything is more at peace like yin and yang. The sound smooth like a vacuum cleaner-sound without any sucking to do. Even the nice frequencies that hobble along, over and on top are calmer. I imagine them as language-less intellectuals communicating with each other. Let’s call them the dead drone society & leave them there in peace. Or do you want to mingle in their conversation?
https://archive.org/details/8R115