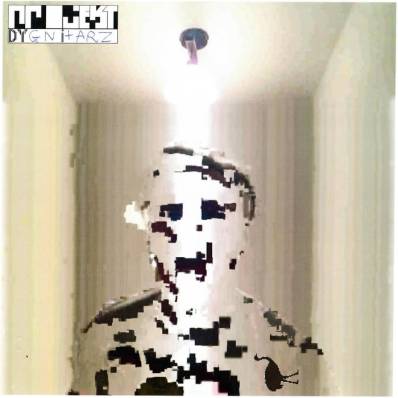 Projekt Luty is (If I understood it well) a project that has one of the first distinctive rules that a person with no musical knowledge or background must be involved in the recording session. It sounds like an interesting concept that could turn recordings either complexly gone completely wrong, or enter the realm of newly found genialness. When letting go of the so called ‘music rules’ completely new music might be born!

Projekt Luty’s latest album is out there now waiting to be studied and (hopefully) enjoyed by anyone who is willing enough to give it their time and ears. It isn’t clear at all who or what did the sounds in the recordings, making it almost like a puzzle to find the non-musical source between the more active music makers. The first track ‘Balwany’ comes with singing, strange background sounds, a playful guitar and has a nice folky weirdness over it. If the guitar bit or the voice was brought in by the outsider of music then this person deserves a true standing ovation as that’s pretty awesome. Somehow I suspect the person is responsible for either the cloudy atmospheric woo-woos or the rattling backdrop sounds; although stil worth of an applause!

Then there is the deliciously wonky ‘Zeszycik’ which works for some reason on my laughing muscles.
It has these gary numan kind of straings, expressionistic guitar, cow like electric moans, out of tune sickness that feels like being so completely wasted on quality designer drugs that you might think you could walk through walls and dance upside down on the ceiling. Not sure who is the non music person in this mix but I expect it must be the one responsible for the cow-like moans.

A lot of to the point (but short!) fun comes in the 52 seconds that is Rokpank, which is as punk as Polish punk could be. The guitar and bass sounds too good to be played by a total twit so I suspect it must be the insane vocals that are coming from the music outsider. But gosh, who knows?! Anyway: I really enjoy this project Luty game!! It’s like where is Waldo, but then different.

Then there is a more sweet sounding ‘Druhna Duchna’ which feels the closest to sincere music. I do have to admit that someone is banging with a hammer a hole in the wall, so I’m not sure to be able to hear and capture all that is being played over here. I can distinguise a nice voice, a guitar.. and a ambulance? Oh wait that’s for the person next to my ear who just splattered his finger with a hammer. I can’t tell where the non-music friend sits in this work. Let’s pass!

The hammering person is just taken away on a stretcher by hospital personnel, and lucky for me as now I’m firmly enjoying Boże Ciało! Probably the best insanest hit on the dygnitarz album! It is extreme and fuzzy, with a nice fun groove and respective line and crash, I have no idea who is the music outsider and at this moment I would say this person is now fully absorbed into the music! Together with the punk attitude of Projekt Luty this person raises the roof with a excellent track and a insanely fun ending. More of this please!

Chcemy Delfinów combines love with nastiness. Nastiness in the form of a sound that forms the melody, something so sharp to the ears that it’s as if someone is putting in a needle in the ear drums and then some liquids to make these holes some bigger. Still it all sounds melodically correct and unless the non music-maker is simply just somewhere in the recording room drinking a beer or some other form of drinkable something; I guess this person is fully integrated now in the music process!
Good luck finding Waldo here, my friends!

With rough guitar, and synthetic ambience in the back and a dirty sounding voice ‘Twarz z Iraklio. It’s a less constructive one, a bit floating around; is our mysterious Waldo sleeping on the keyboard?

The last track ‘O Figlarnům Vichru’ is the most psychedelic sounding one on the album, cleverly hanging in a nice smooth mess of dense audio love, a plingling folksy mood and a nice end for this collaboration of music and non-music maker. I couldn’t find Waldo again, but maybe you will be better at this game?
https://projektluty.bandcamp.com/album/dygnitarz
<WALDO>