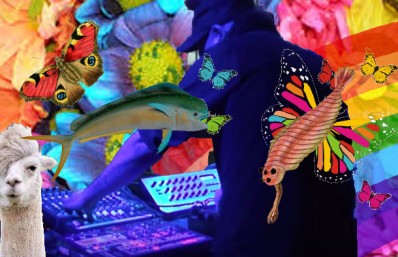 To see Rashad Becker LIVE makes me think a bit about seeing a random person sitting in a bus-stop; you think nothing of it at first impression, then when you manage to start to open your mouth and trigger the bus-stop waiter into opening up you will be flabbergasted by what goes behind the surface of the person. You wouldn’t have a clue that behind the mask of normality a superb rainbow world of spectacular fantasies and imagination is hiding.

Rashad Becker has that look of just someone in a bus-stop, or someone you would pass by in the street and wouldn’t think anything about it, but give this man a stage with all his music equipment and you will be so pleasantly surprised. It’s like a lesson out of a children’s fairytale book with an educational philosophy; never judge a book by its cover, or in this case ‘never judge a human for its looks’ cause hear this man’s live creations for 40 minutes and you could hear and see his true colors flying all out of the speakers.

Behind the man’s appearance lays a world full of colorful colors, a magical place in which the most fantastical farting creatures, animals, bugs, and other unidentified species are living and doing their original expressions together or alone. This fantastic world is unlike any other, one that transports us to another planet in which the flora and fauna has no similarity with the one here on earth. A peek through a portal to a world filled with lively sounds of notional species!

A place completely full of interesting happening, strange friendly creations that hop, jump, sit, run and fly around through and over each-other in a magical soundscape triggered by this man’s mind, hands, technology and imagination. A place so colorful that it probably covers colors we didn’t even discover here on our own little planet. So much so that the colorblind might actually see them and some of us should wear protective eye-gear not to be overruled by the spectrum of sounds. It’s highly recommended to hear the live performance of Rashad Becker’s ‘Traditional Music Of Notional Species’ as you will be so colorfully surprised: