Tilted Axes is a project created by composer / performer Patrick Grant, it markets itself as a processional event and an ensemble of electric guitarists. In the case of ‘Music For Mobile Guitars’ it manifests itself as a firm album that anyone into guitar sound and melodic mind-fucks will probably love to hear! There will be no hinder of vocalists trying to steal the show, this is a record that (even though some other instruments might pop up as a helping hand) is solidly about the guitar and what amazing things you could do with them.

One of the things you could do with them is delivering a fresh energetic start, like Tilted Axes is doing with the first track on the album ‘Shapes‘. It’s here that we get introduced to the sound and feel of bright electric guitars. I don’t want to break the balls all the way up front, but do think it’s a minute too long in my humble opinion; fresh energetic openers are nice but in a smaller dose it would have kept the feeling of surprise going.

Perhaps it also got to do that I’m pretty excited about the next composition waiting in line ‘Circulation in G Maybe’ which consists of really nice tones of guitar ambient that feels a bit like a quick daydream of pleasant minimal tones interwoven into each other. You can’t let such a beauty wait all too long to be heard! 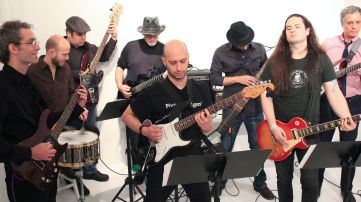 The pressure of delivering a confident title track that honors the bands honor might be high. But Tilted Axes’s Tilted Axes Theme clearly shows no fear and comes across very confident. It’s packed with nice riffs that are melodic & feels rather friendly. For some reason I imagine it as a perfect theme track for a story about friends, it feels good although it does end on a mysterious cliffhanger note.

The track named ‘Pedal Swells’ goes for that mood of pure ambient chill that will surprise you as it is a sound and atmosphere that you wouldn’t expect to hear coming from a guitar based band; it sounds as if they are channeling their kind electronic side through non electronica. The guitars are playing a nicely pulsating pleasant mood, something that sounds intriguing and very interesting in the way how it is played out. Concretely speaking; the music flows around like a soft comforting dream with pleasant tones and emotion. Pretty beautiful and sensitive: sign me up for this one!

Tilted Axes bring their mobile guitars on the road

With ‘Theme Variation’ things get roughed up, drums are brought in and the guitars are a bit rawer. They sound a bit sharper as if they had been setup at a rougher side of town, perhaps behind a fence in a saloon that protects the band from being hit by beer cans. The tune halfway drops the drums for a nice break, giving the guitars the time to shine before they melt together again to become a much more practical force of melody.

A romantic mysterious sounding track named ‘Rivera Court’ follows up, it has something that sounds like you would expect to hear coming from a Pennsylvanian castle tower. It is something that suits the taste of a music loving vampire in need for a backdrop to compliment the sacrificial act of drinking the fresh blood of a virgin. The music has this elegant darkness over it that fits the scene of a cape wearing gentleman who loves to howl at the moonlight; Together with the melodic howling guitar provided by Tilted Axes, this act would set the scene in a perfect mood.

It’s pretty daring madness to go from such an atmospheric track to go directly in to the insanity that is ‘Techno Tilt’. A theatrical piece that feels to be made for lots of leather pants wearing characters with long haircuts twirling their heads in circular motives. Somehow I imagine them doing this on the beach, as it does sound like its a ‘everything is good, dude’ kind of party time. It’s as if rock n roll on the beach meets a blues brother attitude; very cinematic with fanatic energy and crazy riffs that would fits car chases & definitely a fun scene of rampage. It’s a very intense track that with its nervous bass line will drive you either to the discotheque or the nearest mental asylum. Obviously Tilted Axes has some quality internal communication going on as this is perfectly done math rock, something that for this case specifically I would like to dub as ‘mad-rock’.

The mad genius of the Tilted Axes project: Patric Grant

A strange friendliness comes out over here within ‘Kneadke Variation’, to me it’s a bit like the act of spiders knitting. The guitars are played very sweetly, and feel like they are teamed up by a sweet hippie flute to give it an extra cuteness. After this nice setting of kindness the track goes through some interesting variations, creating a weird passage that sounds incredibly smart and intelligent but also might drive the brain of an everyday listener into a complicated twisted knot.

Asciae Obliquiae seems to bring the sound and feel of positivism at its finest; it comes in the shape of a melodic guitar anthem that says without words that everything will be fine and all will be alright. The music comes with an on point thick guitar crust that clearly helps the higher melodic ones up to reach that state of happy sunny optimism to come out & play. If this track was a person it would probably be that positive uncomplicated buddy that is always happily popping up to pass out high fives, hands you a free beer and points to the sun for no apparent reason.

More serious (including a more dramatic kick start) is this tune named ‘Alamo Tilt’. The melody is on the edge of touching certain eeriness; it swings like it’s on its toes bringing the highest possible notes that feel to me a bit unnerving: The sound of being easily triggered and being on the edge. If it tells a story it would probably be about something that is tip toeing on a final chord that separates sanity with insanity. The more it plays the more it freaks me out, maybe it’s a bit too long for my personal taste as it is hitting these nervous points that is driving me (more!) mental then I was before. It probably got to do with that the music stays high, never seems to tumble down for a bit of relief or a little break; as if you are watching acrobats in the nock of a circus tent doing nonstop dangerous acts without safety cords attached to them.

Much more balanced and in the middle is ‘polymeric patterns’, which seems to colorfully mix the music layers into each other like a brainy puzzle. It showcases the true tightness of the band and their ability to mess with your head in a pretty trip kind of way. The music gives polite space to each section; letting the nice slap bass and laidback beat shine as useful friends that they are. Together as a team they help the psychedelic tones of these patterns nicely afloat, creating a soundtrack that feels like the material to smoke a joint on, just to get over the edge and completely absorbed through chasing these refined guitar tones that fly around like a psychedelic butterfly.

Then it’s time to go back to planet earth with both feet on the ground, with our cool hats on and our eyes tucked away behind unmistakable sunglasses. This feels like a suitable way to listen to Beaubien Blues, a work that feels like the ‘blues brothers’ having a hell of a great time driving their Cadillacs around through the walls of super malls. It’s a soundtrack for doing quality naughty things and having fun. The main companionship of epic uplifting theatrical guitar riffs will make every scene that they do into a spinal tap. Loving the great funky solos in here, really creating a energetic soundtrack for a great fun story! Someone should write a movie script around it…

Corridor 84 + Krimson Coda is a wild bombastic track that sounds pretty much hands on, but the band is clearly playing so tightly that it’s like they are having no problem at all to keep up. For other guitarists this might be a work of sweat and tears but it’s clearly a peace of cake for Tilted Axes. It especially comes apparent when the tune evolves into a party in which the mind gets treated by the sound of a rock band on steroids; going quicker, speedier, faster like a car chase without seat-belts on! But even though the apparent madness, it is also sounding like a lot of fun!

Then it’s time for ‘Shapes 2’ which covers what we professionals call ‘melodic music knitting’; meaning that the music knits into each other with nice tonal changes. The track is quite bright, a bit like a busy sunny day in which the music goes up and down in some kind of showcase of talent. There is a fair amount of baselines that balances the track, nicely taken over the steering wheel like a captain turning the work over the seven seas of music. That might sound odd but not if you knew that this has a very theatrical atmosphere, making it one of these tracks that would fit a theme for a Hollywood movie. The track has also a notable ending in which it all gets nicely psychedelic, as if it’s delivering our heads on a plate to the biggest king of acid tabs. Don’t worry; you will recognize him when you see him!

At first sight ‘Tuanna Claonta’ brings in that rougher sound, but quickly it escalates into something that to me feels like we have entered some strange Irish palace in the Middle Ages. Imagine ‘lord of the river dance’ with rows of girls in black dresses kicking their feet and a dude in the middle flipping his legs like he is a flying ballerina, defying gravity and theatrical taste in one go. This track has this folksy Irish vibe going on, very full on with its rhythm and jumpy strikes on the guitars. I can’t take it seriously as all I can think of is how to stop my legs from kicking along, as they so desperately want to join in.

Imagine ‘Harmonic Revolutions’ delivering the soundtrack for a pretty winter wonderland of ambience; balancing soft tones that make it easy to visualize a bright snowed under landscape underneath a shining sun, all as seen from the warm comfort of a warmly stoked home. The music seems to represent that cozy, dreamy, homely sound.

Tilted Axes on the move!

Tilted Axes obviously wanted to make this album to go out with a bang, and it’s not a bang of fireworks but the sound of them clearly having a blast of a good time. The sound and style that they bring here is the band at its most fun, clearly skipping their brain sessions & mathematical melody puzzles and just focus on the fun part of playing. They call this ‘The Sound of Burning Chairs’ and for some reason it makes sense as they play like they don’t really enjoy chairs to sit on; as clearly mobile guitarists prefer parading their sounds around freely!  All in all a pretty nice album, cleverly setting each track in a different mood or style; defying boredom with ease & creating a nice flow along the way that makes it an enjoyable and inspiring listen. In fact you might want to take this album with you while you enjoy your own ‘mobility’:
https://tiltedaxes.bandcamp.com/releases
<KN>