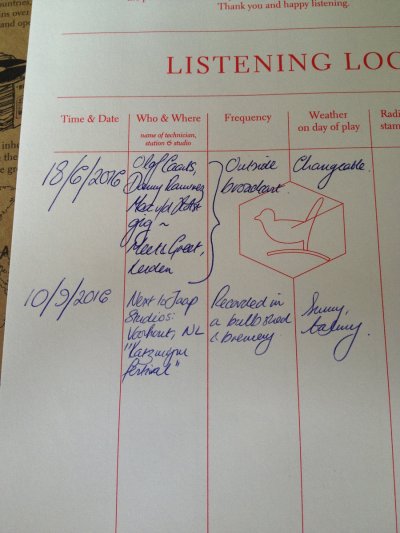 The Smikkelbaard people lately regularly post updates on their social media consisting of videos featuring half-drunk label bosses hanging in bars talking in a specific kind of English you could only understand when you had added the right amount of alcohol percentages in your own system. But it’s not for nothing that they do this, it’s the state of them at work; brains rattle, mouths with loose lips flubbers and ideas pop out.

That is probably how the latest Smikkelbaard release has been born; a work that comes across as a collectively made one in which it’s not entirely clear if the ‘artists’ are aware that they are contributing to this busy soundscape. You can hear them all together, lots of chic chat, glasses tinkle, women and men mumble in feel good conditions as if it’s someone’s birthday and you don’t know how the hell you ended up here. On top of that, it’s a Dutch birthday party, making it even more awkward as the people talk in this alien language about things like soup, drinks (it’s all about the drinks) and random nonsense that hangs around neatly among the smell of beer.

But what is so nice about this inside field recording? It does clearly capture that Dutch coziness but also just the whole atmosphere of people and friends hanging out in an alcoholic fueled surrounding. It’s like an episode of Big Brother without the cutting of an editor, a dashboard camera that isnt attached to the dashbord but to a local audio-loving alcoholic stuck in the middle of it all.

In a way it’s a perfect release for when you have no friends, or have to spend a day alone and can’t stand the silence, or perhaps bragged to your neighbors that you will have a little party (which was a lie) and now you can put this release up in full volume to proof the neighbors that there IS actually a party going on.

See it as a medicine against silence, a look in someone else their life, another culture, another kind of giggle and at the same time see it as a nothing: A nothing that is at the same time everything!
https://smikkelbaard.bandcamp.com/album/a-box-of-78s-recording-katzwijm