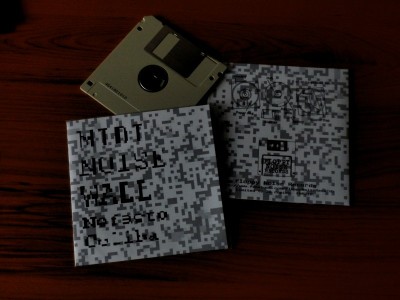 The last work on this excellent release that I would like to donate some words on, is blessed with the longest title among the three: yvoecfsspyrwrrqgaojbfrpco๗ijcpopjarfb๗rcpideeyedscppsdpbvsscorsv๗rwdgdgpqrppqqgwj๗ypiwjhpbdscr๗yfpfcrapwfcqypbaqbdpdhryvcpahfaphocwsyqajpbdrocc๗cqrcgevpfgbsrypp๗cidorrcwbroyfpqp๗ppqboyri๗. It’s also the longest audio source on this diskette, might even be longer than an hour long of nice clean midi HNW. It’s nice as without the usual hiss you can clearly hear the communicative details of the structured wall. It’s as if carton boxes with mittens on are trying to talk in muffled farts.

Say what you want but this release should be given credit for not only carrying so much audio on a single floppy diskette, having the most awesome titles, but most of all to actually manage to create such a distinctive HNW in a unchallenged format of pure midi. It’s the best of all worlds really!
http://depressiveillusions.com/items/floppy-diskettes/noise/mnw-nefasto-celiba
<KN>