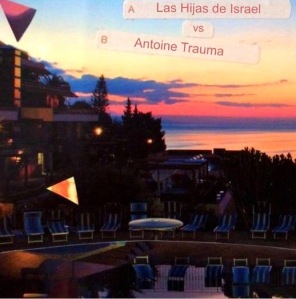 A split comes in many ways, this time it’s between two artists and they aren’t mixing themselves up, but rather let one do it’s thing before the other. It’s all about the ‘experiment’.

Las Hijas de Israel’s Timbuktu brings the artist in all its simplistic forms and ways. There is singing involved and some kind of rhythmic clap, perhaps done by slapping two pieces of wood together or (who knows?) a pair of hands? It’s done in a language that I don’t know anything about so it will be impossible for me to give it my final judgement. It did feel nice, like someone alone in a room channeling a folk song from other easier long forgotten times.

The next track by Las Hijas de Israel has the title that seemingly comes across as a incorrect URL of a YouTube video. I’ve tried to search for it, correcting the URL but nothing reasonable came out visually so I guess we are just dealing here with an artist statement and of course music. The music is very different then the first track; a bit glitchy, definitely rhythmic, pretty low on the go and not very long. I’m not entirely sure what to make out of all this, but ‘hey’ isn’t that the whole point of ‘experimental’ music?

After this a track dooms up named ‘Israel Israel’ with a very experimental approach of starting with unhearable sound and then blowing my speakers out by surprise… I wasn’t very pleased.
Don’t get me wrong, the music has every right to do provoke emotions, and next to the heart attack received from burning my speakers to the ground, there were some spoken words too… yet, I felt too scared to play it further. (Don’t want to go into a Israel rant-mode…)

Another track with a wrongly spelled YouTube link as the title came after this one, also this was created by Las Hijas de Israel. This one sounds like it’s made from trash, like some kind of recycling project: insert real trash comes out as experimental ‘music’.

Catamarca’ is more to my personal liking; a track that shimmers a bit with a holy bell-like hollowness sound and feel. There are some nice upfront sounds also imprinted, creating a nice conceptual prospect of depth. Towards the end the track seems to go a bit all over the place; throwing in some hiss, a human whistle and a easy going guitar bit. Yes, you know ‘experimental’ stuff; always be prepared for something.

.wav (also done by Las Hijas de Israel) seems to go all paranoid techno on my ears. Think hardcore beats from the gabber time but without the distortion, or perhaps it’s more like those cyber goa beats that white people with dreadlocks dance on while high on ‘nature’. But this is just the feeling that this track implies, the music is of course still ‘experimental’ so we should refrain from actual dancing and listen to it more like viewing some kind of science project. Where are the lines of speed when we need them the most?

The last track by Las Hijas de Israel is a bit more laid back, a playful play-around with a electronic groovy rhythm which feels to me like a pleasant goodbye. It’s always nice to end in a polite way.

A split won’t be a split without another artist involved, and luckily it is the awesome Antoine Trauma to give this release the pleasure that the ears had been hunkering for. The artist thrills them with strange and original data communication, something between a manic robot loop and a alien. The manic loop has the winning upper hand but then gets nicely shat on by strangeness that feels like it’s coming out of a fine collection of birds’ feathery ass holes. There must be an owl, but a pigeon seems to be the most prominent member among the birds. It’s really nice though to hear these birds kibble among each other and their shits being squeezed out of their buttocks. I love it!

Next exposure to the sound of Antoine Trauma is like a soundscape that first sets a feverish flavor before it delivers earth shaking nightmare kicks with the superb industrial atmosphere. The sound is one of strange but warm mystery, a thriller that bangs within the head like a psychoactive world that is dangerous, yet feels like a safe home.

This entry was posted in improvisation, Uncategorized and tagged experimental, improvisation. Bookmark the permalink.