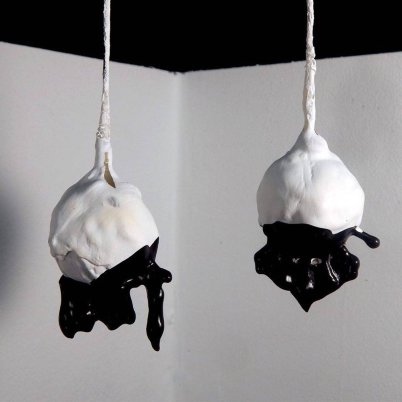 “This album was conceived around a relatively straight forward process. Participants would send me two works, one a finished solo track & the other material for me ( {AN} EeL ) to manipulate. I then created a re-mix of everyones solo tracks as my ” Solo ” Track – So to speak . Got it ? Good !”

I don’t know about you and your intelligence, but I haven’t “GOT” it at all,
but it doesn’t really seem to be so needed, as even brainless, clueless and without ‘getting it’ this massive collaborative album is pretty much a good listen! Let me try to get through it:

tENTATIVELY, A CONVENIENCE / {AN} EeL – Tex-(Re-)Mix
Rattle snakes for breakfast never sounded appealing until this track came along to open this massive collaborative compilation. It has this feeling of a glitch cowboy from sexy Texas who prefers shaking these rattle snakes before eating them; and bless this boy as it for sure sounds like everyone should play with their food & record it!

Anthony Osborne – Scull Of Earth
This material takes us up the hill with the awakening sounds of farm animals and local elephants historically trumpeting some early morning jazzy loudness. Some Asian drone monks can also be spotted humming somewhere in this exciting but weird collection of noisy friends.

David Nadeau / {AN} EeL – Sacrum Imperium De Meum Imaginatione.
This one feels rather folkish, if someone had turned an old school dialup telephone into some kind of harmonica, ripped out a poor persons teeth out and placed the whole telephone harmonica inside to create a melodic melody with every sign of life.its pretty cozy and makes me miss the old school telephone.

Pavlov’s Man – NewMwah
The one being this track is coming across as rather short. It just made me think of a by passing caterpillar, you know the body moves of this creature? It fits really well.

A.H.Fork / {AN} EeL – es quemasantos
It’s a bit weird, like we are on a search through a messy place that even though it’s messy seems to be very clean in its messiness. A voice mumbles in a corner about things I have no clue about while the sound seems to showcase a lot of stuff that has been lying around.

Lezet – Body Rock
Time to do a dance and dance it all off with one of the fine underground heroes Lezet. The dance track is edgy, bleeping and punchy; perfect to feed the punk inside of you while still keeping it fairly electronic. Let’s rock out on this lovable pounding nastiness!

M. Ledes / {AN} EeL – S.S.S.(S/S/S)
This track makes you feel like being invited in some kind of folklorist place in which an odd throat singer does it’s kindest Viking impression. The backdrop of traditional weirdness sounds like the act of sharping harpoons while being slightly tipsy.

David Nadeau – The Age of Dispersion
It’s like listening to a broken machine that somehow is jammed upon to generate an actual music product that will leave your jaw on the floor; it’s for a robotic machinery strangely well directed, emotional and passionate; is this the future of folk music?

James Bailey / {AN} EeL – Thanks for the Help
A playful harmonica played by a swinging hungry wolf of some kind?

Joel Crutcher / {AN} EeL – Letters Home
A really nice ambient drone that does everything to make you feel relaxed and at ease. A bit of pampering is never under appreciated.

PPFPESS.com / {AN} EeL – Everyone Everywhere
This work made me scratch my head a couple of times, not because it made me itchy, but just to search for intelligent flees to tell me what I could possibly tell about this music. In the beginning there are words, somehow making me having flash backs of David Liebe Hart, but then the music moves one with higher tones, creating some kind of color palette that only intelligent flees should be able to talk about.

A.H.Fork – agOnie
I’m all out of flees, so no more searching for their guidance and wisdom how to describe these works. This track doesn’t make my life easier as what is it exactly? A whole session of sounds, quietly doing their things and I’m just sitting here with open ears and an empty notebook. I guess this lengthy album might be one that isn’t really made to be solidly bespoken as it’s (even though made with many artists) an ongoing listen that fits together very well, yet is as vague as the drawing on the bottom of my coffee cup.

Scott Marshall / {AN} EeL – enitlavo
I might not have found an intelligent flee, but this track over here sound as if some kind of weird work like mutant has found me instead. It also comes with a human expression that makes me think of the good old days in the lunatic asylum.

brekekekexkoaxkoax – Cognianalogytion
Fairly softer recorded than the others (had to pull up the volume not to miss it) is this track, one that feels like laughter coming out of the lower parts of the belly, shaking and doing its thing in a pretty slow motion.

Jim Benbow / {AN} EeL – Cartesian Anomaly
This one here feels to me like a soundtrack for a slumbering paparazzi , making pictures of dead bodies inside the temporary sleazy hotel rooms that he had hired himself for this very purpose. It’s a bit creepy, as if the photographer is hiding behind the sofa shooting away, photographing a dead body he personally had placed there.

Jeanette Luchese – Contrasting Implications
A fitting work after the creepy mood from the previous track, one that keeps the mystery murder vibe up but in a more classy melodic composition that would fit as a soundtrack for unsolved crime and mysteries.

PPFPESS.com – Future Prehistoric
This track is clearly done while something is being baked in oil or butter for a nice sizzling sound effect. Some vague guitar thingies are sprinkled upon it as if it’s salt and pepper.

Keith RE-GENERATE / {AN} EeL – Houdini’s Pan Pots
I don’t know what is happening in this work, not that I didn’t enjoy it; it was a totally mesmerizing one. Hypnotizing with its strangeness, rhythm and weird woozy sounds; it’s hard to describe with eyes twirling around in an absented minded way.

Qkcofse – Mouth Noise Plus
Another weird but pleasant soundtrack, it’s a bit like the sparkles of a magicians magic wand.

Anthony Donovan / {AN} EeL – ERG
strange mumbling, humans trying to make purring sounds like a cat, perhaps attempting to be throat singers or it is simple the sound of gargling mouth wash. At times these voices sounded like they expressed orgasm; one that came in a noisy way after the worldly announcements.

Jim Benbow – And the Walls Fell
This is a poetic moment with guitar slumbering away, it feels like it fits candle light and a bowtie.

Jeanette Luchese / {AN} EeL – The unstable state of walking

Come here and hear some squeaky birds and a person whistling. A field recording of some sort; it’s nice like actively stepping around on top of hay with a ringing telephone and bypassing sirens for extra entertainment.

Ben Presto / {AN} EeL – Killing Robot Gypsy Violins Machine, Thank you for your kindness
This is the moment that all telephone communications are revolting, demonstrating in a ‘let’s go berserk’ way with lots of noisy artifacts.

Scott Marshall – apoxonfox
This track feels like walking on heels backwards over a squeaky floor. The surroundings are weird, like alien chicken that wobble along and look at us with their weird eyes and odd peckers.

Lezet / {AN} EeL – Ticks
This one growls like a slow smoke blowing engine with added high technology. The rolling engine sound has something very acidic, making me think of a bizarre rave.

brekekekexkoaxkoax / {AN} EeL – Report All Obscene Mail To Your Potsmaster
A sleepier shimmering episode of trippy experimentation, making me feel like floating down the hallways of a calm flying spaceship.

The Bim Prongs – Hello Baby
I really love this track; it reminds me to a personal adventure in which I rented a room from the dresser of Benny Hill. The good man had a cat and named it baby and I would wake up by him repeatedly saying ‘hello baby’ to the cat. And it sounded exactly like the hello baby within this recording.

Anthony Donovan – Beguiler
Another one of those likable vague works that make me fall in a strange daze. This time I had a daydream of a dinosaur with a deep growl and steamy breath that sounded like it was sneaking up on me, like a stomach approaching food. There is a nice melodic sentiment at the end, clearly making the Dinosaur more classy than expected.

Pavlov’s Man / {AN} EeL – Morningwah
I have no idea what it is that this track supposed to do, but it feels like an gay alien (a gaylien) poking and probing around with high tech material.

Joel Crutcher – duct tape won’t fix this
A apocalyptic after piece with doomsday melody, strangely cinematic that makes me think on an almost annihilated planet being visited by unfriendly alien vessels ready to shoot anything that moves on the surface.

Qkcofse / {AN} EeL – SFT
The art of a harsh noisey bagpipe of creativity easily blistering the ears like alternative folk music for the deaf.

M. Ledes – Slave Ship Siesta
it’s a slow row-row-row your boat experience with the rowers singing and complaining at the same time….

William Davison / {AN} EeL – A Grand & Splendid Piece of Theatre/
Some cool cat meowing half-drunk with other cool cats playing a keyboard, guitar or other kinds of material. It makes thirsty for a liquid that is known as whisky

James Bailey – Gutter Al
This one is like being close to the mouth of a nice friendly (but enormous) monstrous beast. It growls in a cozy way, might have some smoke escaping its nose holes… Might want to stroke it for a bit.

Anthony Osborne / {AN} EeL – Djinn Invitation
this is the soundtrack of avant-garde that is knocking on the door; does it knock enough to open that door and let the avant-garde in?

Keith RE-GENERATE – Long Wave
This is a great pounding pounder of a track, lots of in your face rumbling kicks mixed with news flashes! It’s a stomper for on the dancefloor!

Brett Spivey / {AN} EeL – Cuckoo Bird Clears its Goat Throat
More dancing can be done here, with a nice swinging beat and feel good rhythm, arms can be moved freely while legs automatically slide over the dancefloor. The baseline here is superb!

tENTATIVELY, A CONVENIENCE – “Tex-Mix (Giddyup Americana)” 10″
A nice ending for this massive release; giving that ‘back to the prairie’ vibe that could be used to indicate that the album is over and we have to get back to our own vague worlds…
Get this massive listening album at the following link:
https://panpanpanaviandistresscall.bandcamp.com/album/eel-ixer-vol-1-performance-relic
<KKN>