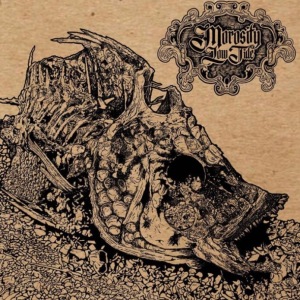 Hello and good day to you dear reader. When you have a nice day ahead you might want to fly over this Low Tide as it’s apparently tagged with words like ‘depressing’ & ‘darkart’. But hey, if you hate sunshine or are simply too happy; this might be of help. In any case this release takes you somewhere, in fact it gets a bit magical and exotic so that might come as surprise in the darkness. Besides it’s more the kind of darkness that is lit with candlelight. I’m probably chatting away too much like a headless chicken so let’s just get to the tracks…

Mind Over Matter’ is like opening the curtains of a theatre and suddenly a middle eastern setting of belly dancers, carpets and decadent murals reveals itself. Some sassy throats singers in the corner, doodling away on violins for the right atmospheric atmospheres. It’s like the start of a folklorish story that you want to know more about.

But for the next scene the atmosphere changes more into a underground grotto in which robed men with black eye mascara on gather in search for important answers for probably important questions. It’s a bit of a grim sound as if daylight haven’t set a foot among those wise looking & sounding characters. The words that settles in this dramatic sounding music setting come across poetic, yet the conclusion of ‘everyone being all wrong’ makes me think of them going back to the drawing board to get it right.

The story location now seems to melt the eastern scene together with the mystical sound of the previous layers of underground wisdom within ‘Ouroboros’. With seemingly hand-played percussion the sound gets a nice slow rhythm that is giving power to the more flowing magical sounding melodic music. Material that feels like it’s a melt-pot between black magic humming wizards and a sultan’s adviser trying to rub a special oil lamp to get a genie out and about. Come on rub that lamp and get ready for a climax & some bonus wishes on top! The actual lyrics are reading away like some kind of century old spell; in this case I think it’s fine to mention that it is pure abracadabra to me.

‘Moon’ is sounding much more earthly and human; it actually comes across like a positive love letter to the thing in the sky that mostly comes out at night that we call ‘moon’. With a nice rocky vibe that could be slipping in a radio show at any time of the day & the vocalist singing in a more freedom kind of way the song swirls in like a rechargeable battery. When the singer sings that the moon not showed up you could feel its sincerest love and hunkering back for its return.

‘Smoke & Mirrors’ keeps the up-vibe like a sailor who went on land for a boozed up visit and a energizing session among sailor-friends. I can’t say a lot about it just that it makes me happy and jolly as a listener. If there is something dark about it, it might be the drought that they clearly should serve in this bar of bold heroes.

Death Grip’ is good fun too, with a lovely sounding violin and some amazing whistling. The song seems to be about the urge to ‘bang bang’ someone’s brain out, a nice tune for trigger happy killers who enjoy a good hunt on their human target. The song sounds so happy, like a cheerful murderer happily and excited to succeeds its goal of ‘helping’ someone to end its life.

‘Limbo’ might be my personal favorite on the release, with tickling melodic expression, a beautiful haunting background choir and the song is sung in a soulful bluesy way. It’s the perfect song for when you are caught and trapped in a limbo, inspiring to try to get out of it if you can catch the chance. With stimulating rhythm the song inspires to escape!

It’s a bit of a fight among personal favorites over here, as the album’s title track ‘Low Tide’ is not unpretentious too. The vocals and sound is more full as if Morosity comes out of the speakers to wrap its music around you; ready to capture you in its ride. With violin strings, slappy guitar playing and the voice that waves like a tormented soul who had seen it all and is ready to being washed away into the after life.

This washing away seems to happen literally with the last intensive song named ‘Adrift’ which is like a pretty sedation of a funeral; all warm and croaky with a blissful voice that had accepted that it’s the highest time to say goodbye and go embrace the waves. It’s an intensive album and much more interesting than ‘depressing’ and ‘darkart’ might tell you; also it sound so much more positive as wherever the low tide will bring Morosity; it’s not a place of eternal darkness but a place of peace with lots of birds and their lively calls… let me translate what they say:
https://morosity.bandcamp.com/album/low-tide
<KN>