samarobryn – There Is No Escape From Yourself 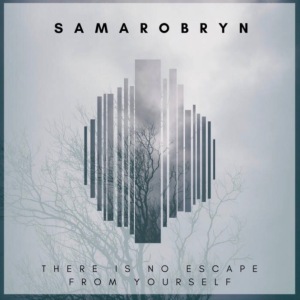 Although the escape vehicle, route and destination might be all good, artist samarobryn has found out that in the end escaping from oneself is a impossible possibility. Apparently she has tried it herself anyway, and instead of finding escape from one self she recorded her journey and made it into a soundscape that anyone could follow and listen to. It’s a bit as what a written diary is for the eyes, but now it’s heard and made for the ears. Manipulated field recordings, experiment-full ambiences and interesting structures to be writing mumbling reviews about.

The time of below’ also shimmers away, with a subtle melody and minimal sounds a little personal adventure is shown. Footsteps walking around in a natural surroundings, birds dig into the atmospheric atmosphere; it’s as if we are just a spirit flying invisibly around with samarobryn to witness her quest of self rediscovering. Through the ‘hidden landscape’ which features Icy sounds that reminds of snow being crushed underneath the souls of moon-boots, but also a descent explorer rhythm and a psychedelic hymn to really explore ones innermost thoughts of being. It’s like nomad music for experimental sound lovers & it makes the hidden landscape into a strange but pleasant one to explore.

Changes within the ecological self is a nice moment in which the powers of the universe brings some peace by throwing in the concept of nature’s nature sounds; a walk among them always cleans the mind with freshness. After gaining some refreshing changes samarobryn goes on with her personal adventure of self healing by using the river as a road & steps over it like a light feathered forest spirit. With a mellow dramatic melody that feels powerful like a heartbeat of someone willing to survive and strive on the music passes by in it’s nicely intensive form.

Ephemeral whispers of time is the last session available for our ears on this release. It’s a cold but refreshing one, with long lasting fresh breezes that clean the mind in most efficient form. So much so that your head might smell like a forest in the wind and all thoughts have flown out to find a other head to bother. In the end a peaceful silence might pop up for a nice sense of relief… you might not be able to escape from one self, but going for a intensive walk and clean out the mind certainly helps a lot to start over with a clean canvas. Now let’s fill it up with nice lovely happy trees and we are all set!
https://samarobryn.bandcamp.com/album/there-is-no-escape-from-yourself
<KN>