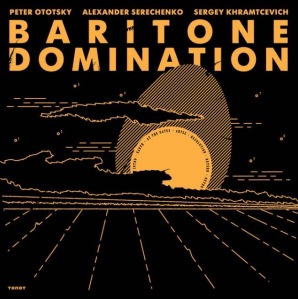 You must hear this! I tell you, hear it loud & you will be definitely not disappointed! So good, I kid you not; it’s insane-makingly good!

Truly, It is so amazingly awesome to experience the Baritone Domination by the must-be fantastic musicians Peter Ototsky, Alexander Serechenko, Sergey Khramtcevich. They make such an beautiful melange out of this special baritone Domination that hearing (and feeling) it through headphones is basically a highly recommended thing to do. These responsible musicians make a stereo show of jazztastic proportions, with the Baritones as the big bosses, and wildly perfect drums as their perfect butt buddies to rely on.

Just the intro is already amazing enough to write home about. But after that the next level work really starts to blow their pipes of excellence. These baritones roll around, tickle and quack like lucky gooses in a park, doing a psychedelics tour of wing-dancing. It’s such an impressive musical sound showcase as they move in such a wonderful progression, completely going in unexpected ways, creating trippy material that you’d be entranced by.

‘At the gates’ is also such a masterpiece, making those baritones sound like romantic horns that flow in and out of each others arms while a drumming rhythm pushed them to go solo. When they do it’s as a if they do a challenging mating dance together, creating a swinging rhythmic melodic theme that gets nicely energized with beautiful solos and wildness on the percussion side of it all. It’s so beautifully epic, it goes into the sky, lifted me off as if it made me grow wings and the baritones had been a flying crew that flows in a funky formation until their total domination nails it so hard that it becomes as the best daring punk that you had ever heard!

Fuck electric guitars and people that can’t play instruments; this is out of nowhere insanity that feels like it’s made for the real junk punk lover that needs to be slapped into pace by pure baritone rulership! Such a ride that just gets insane, brilliant, nutter, more ingenious than that you could imagine.

Listening to this composition named ‘abyss’ is just as intriguing as going to places that you haven’t been while high on some really good shit. It takes a step down perhaps, shimmering about around with those baritones boiling up slowly until they are enlarged like big grown super family members that lean on each others backs for grotesque intriguing entertainment. The percussion pushed them to higher heights, making them howl like wise wisdom howls that are bouncing through the woods and the valleys. So awesome!

There are few albums that makes me want to replace all my fingers (except the thumps) with thumps, just so I can give it ten thumps up, but this one for sure deserves ten up. Just listen to ‘Resolution’ which goes for this powerful power sound that feels so tight in its looseness, almost like a happy hypnotic jazz rave that you should go absolutely berserk on and destroy your dancing feet with. The speedy hard kick by the must-be fanatic drummer really pushes the baritones into completely mental overdrive! And it just gets better and better, evolving into tasty greatness that is a pure party tent filler!

Oh gosh why read this review? You should just waste no time and hear this stuff! So wickedly great! When the baritones go into their overruling funk insanity there will be simply no better new music out there that you would, should or need to listen! It goes completely over the top in craziness & yet it’s so cleverly together and rolls like the best shit on the planet! If this doesn’t get you moving than nothing can! So great!

Let me say it again; you got to hear this!! It’s amazing!! Just click that link, already:
https://tawpot.bandcamp.com/album/baritone-domination
<KN>