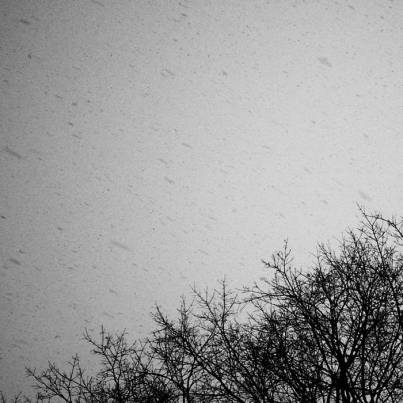 august traeger did its ultimate best to bring the sound of a dead Wisconsin in a dreader than deadly fashion. With guitar and carefully done out of tune singing, ultimately obscured by effects to camouflage its horrors in tone and quality & on a decorative backdrop of authentic field recordings of birds that whistle unhappiness out of their little bleak beaks. It only gets more sadder with a firm amount of doomsday tones and clicker clackers of dust in the mix, if it wasn’t clear that Wisconsin was dead, august traeger for sure made it will be now… no lively place that is right in the head would be associate with such music…

Music? I mean the sound of dead and decay, of gravel, dust and some lonely breeze of sand that flies through lonely alleyways. If you are here to become happy, august’s release is not for you… but if you are here for an release that fits saddened thoughts, gothic moods and the thick lines of black mascara…. Well; this is for you! A sad audio aroma that places Wisconsin on the map as a ghostly placed that every happy-go-lucky tourist should avoid! A ghostly environment in which even the rats have moved out from!

But in scenes of deadness, other creatures seems to flourish, sometimes even brightly sparkling like critters of hope that had come out to celebrate these emptiness of empty streets and abandoned super markets. In dooms day effected areas the opportunists play peek a boo, feasting on the casualties of death like hungry birds that had waited long enough for these delicatessen to drop dead to the ground; for them ‘dead Wisconsin’ is a paradise, a surreal zone in which there is plenty to eat and steal & no peeking eyes or ears to be bothering with the sick business that you do…

If you wonder how Wisconsin became so dead in the first place… according to the material of august traeger it was probably done by an overload of mass hysteric suicide! It’s a bit like a story for a crappy B horror movie, one in which people get infected by television, computer, notepad and phone screens & all ended their lives in all their creatively possible ways… Interesting & indeed a bit freaky! So to some the story a bit up in a short way “one’s dead is another’s bread” and this is release is pretty much covering both sides to this story:
https://bicephalicrecords.bandcamp.com/album/dead-wisconsin
<KN>