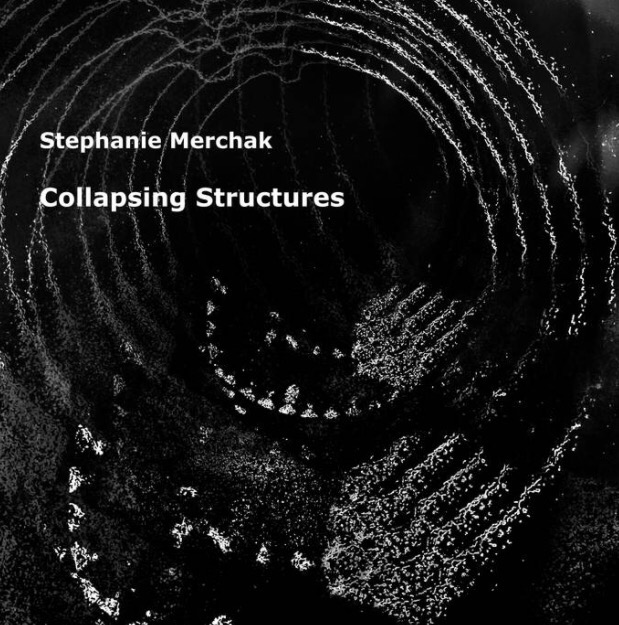 Collapsing Structures by Stephanie Merchak is like a gigantic trip, one that goes on a personal tour inside the artist her mind, exploring the deepest corners without revealing any details, converting a lot of secrets in a abstract soundscape that will get quite intimate and intimidating at the same time. Here is my personal journey when I took the journey:

Filling in the blanks feels like going underneath a magic curtain in which stars twinkle and pieces of cut glass are glittering with a pretty sense of beauty. It’s a long tunnel of wonder and miracles, as if it will transport us into another sense of reality. One in which things await us of a magical order, in which mystical lights twirl around and sounds are the gateway drug to heaven. The Wrong Path comes in next, but somehow this path doesn’t feel so wrong to me. It’s more the way of being pleasantly lost, tucked away in a world full of wonder, one in which maybe nothing seems to make sense, but nothing seems to matter anyhow anymore.

Even the ‘Repeated patterns of self destruction’ float by for a hauntingly little take to undermine your self confidence. They nibble with long dramatic ghostly strokes its presence along the mind; creating a fear infection that spooks around, while digging deep into your inner weaknesses. It flows without constipation into ‘rupture’ which keeps the dark sparkles bubbly like a bottled bottle of sparkling water. It’s a dreamy affair, slowly moving about to seduce you into some kind of sleepy affair between dark and lightness. It’s here that we find out that we are floating around alone in the head of Stephanie Merchak, exploring a kind of inner peace with psychedelic abilities; it’s like a cave of mindfulness, one of secrets that are there hiding out of sight, subtly peeking at the strangers who don’t really belong there.

From here a swift chance transforms the audio scenery; with ‘147 transformations’ the music gets a eerie twist, as if the head of Stephanie has found us and is now angrily reacting to our uninvited presence.
But fleeing isn’t possible, as we and even the creator herself seems to be ‘stuck in a loop’, one in which the feverish cold dream keeps on doing its magical wonders between unease and prettiness, strangely interesting to all parties involved & yet terrifying as there seems to be no way to go out of it.

But there seems to be a escape available, one in which we go through a section of ‘Cold And Silent’ , one that opens as if we have found the entrance of a holy church, yet reveals itself to be still playing out in the imagination triggered by Stephanie Merchak’s music. It’s final episode in which she seem to reflect on past, future and present is like listening to a full amount of encrypted data files; all material is fully hidden in full sight… probably files about painful moments, self doubt, depression and traumas; yet they become music for the mind instead of things that will drag a person down… a dark trip, yet amazingly beautiful!
https://silentmethodrecords.bandcamp.com/album/collapsing-structures
<KN>