Andy Livingston – The Switched On Proletariat 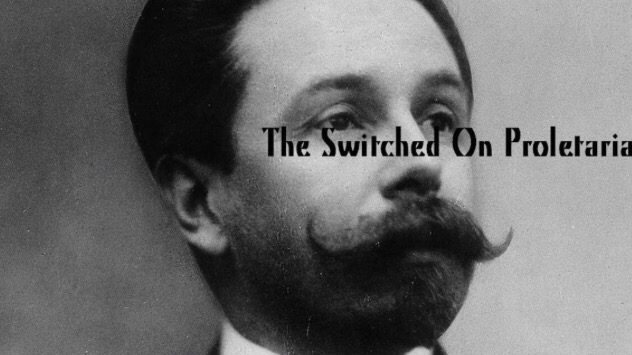 There is only one physical copy in the entire world of Andy Lovingston’s The Switched On Proletariat & if you are a wealthy freak who likes to have authentic oddities in its music collection; this might be the time to quickly try to snatch this one-of-a-kind product before it goes home to another weird investor. Oh yes, they might be rich, but they are for sure a bit eccentric.

For us lesser obsessed and not so well off lunatics there is still lots to get excited about, even without a physical thing in our hands the album can come to please us in a digital form. It’s just bytes and information, but by magic; music can come out of it! Very strange music perhaps, but still the things that are captured on this album would still be able to fall in that genre of audio.

The music on this album is one that seems to be filled with wonky oddities in loop form, material that feels like Andy Livingston was mad on absinthe & somehow still managed to build a digestible soup of its finest wonkiness. It sounds like it was a wild but lonely night at the artist’s house, completely sunken into the madness of creation, delivering weirdness after weirdness, freakiness after hullabaloo; enough mentalist loopy works to drive anyone who thinks to be sane & sober all over the edge towards lunacy.

There are 17 tracks (!!) on this album, enough to get even the most strong minded a first class speed ticket to a nearby mental asylum. But still, it has to be said; even though it’s all a bit crazy, it does feels very personal, like a journey into melody, repetition and noises that had come to the producer while tripping balls; material that can come across as pretty at certain times, confusing any hard headed listener for a bit into thinking that this might be the new normal..

Imagine… just imagine… what if this album in its entirety would replace all music on a very popular commercial radio station; would it convert their listeners into big fans, would they accept it in their hearts or would they all become a little loopy and twisted themselves? I would hope nobody would switch it off as the gross of the world could all use some of the awakening spirit of the intimate madness by a artist’s logic and reason.

In any case, I will say cheers to this release, sip a bit of absinthe for it’s good luck and wishing it well! Don’t forget to get that unique copy if you are that nutty collector & supporter of lunacy: this artist deserves some investment to afford more mind altering substances! Don’t worry, every penny would come back in music, as Andy Livingston is switched on the case like a true dedicated legend of weirdness!
https://volcanocasanova.bandcamp.com/album/the-switched-on-proletariat
<KN>