1961 is my favorite year, mostly because it sounds good when you pronounce it. Nineteen sixty one…doesn’t it sound beautiful? That year might not come back in the future, but when the Gifgrond party announced its 61th episode the fondness for that year & the love for gifgrond itself had been merged together as one! What 1961? Gifgrond 61 is sounding even better!
Gifgrond sixty one… yep, that’s the one!

For this special occasion Gifgrond invited the label Enfant Terrible to come over for a exciting party vibe! This intrigued me as I remembered a epic Gifgrond episode with Enfant Terrible and it was not at all terrible!

To make a long story even longer; I wanted in on the 61 action & paddled over the ocean from England to eventually end up on the pretty beaches of Tillywood, the Netherlands. It was a tough travel situation, but knowing about Gifgrond was enough to face the risks and go for it! Besides I was dressed in my warm chicken costume, so now cold, rain, snow or storm could put salt in my plans.

When I arrived at Gifgrond it was already cozily busy. The music was pumping and the excitement grew when the gifgirls came over for a warm welcoming group hug! They must have had a few drinks as they didn’t even seem to care that my costume wasn’t washed for many years. (the smell of it might have fatal consequences, but just as expected the gifgirls are brave and courageous; no poison is too strong for them! 61 times they have ultimately poisoned themselves with killer music and their Gifgrond mixes; they never succeed to meet death and shake it’s hand!

As a familiar face I’ve been there 60 times!) they brought me to the secret grotto above the main Gifgrond area. There the pre-party was going on. The artists and very important poisonous guests had been sitting around a golden table as DJ DMDN and Sjak from the incredible vintage fashion & awesome record shop combo Sam Sam / Antenna kept themselves very busy in the kitchen preparing a very special salad. Also main chef cook A3 was there doing his ultimate thing; spicing up the people with a very hot bean soup that would create anus rings of fire later on? It was superb and very tasty as all of them know that true Gifgrond love goes through the stomach (and the liver!) … normally I do not eat, but here on Gifgrond, even with the difficult face mask that my costume came along with; I had to bulge-eat! What a incredible food these people had made! The tastes had been formidable, sickening hot peppers, freshly salad made out of the finest grass! It all took us to heaven and above; so incredible delicious! It was really Gifgrond 61! The artists ended up in a sportive fist fight, just to get the last bite!

It was also great to reunite with Linda (our very own head of comment) who seduced the entire grotto crowd with a dubiously tasty cat-cake that she had specially baked for cat-loving Paca! She ate most of it and the rest of the people (who had been there) licked the plate or scraped the left over crumbs up with tea spoons! Yummy! Body fluids, spit, cake and spoons; a true sign that the 61th Gifgrond party would be a truly amazing blast! I teamed up with Frank Janssens who made all the fabulous photographs (thank you so much!) and decided to empty some left over drinks…

When our bellies had been bloated & the 61 pre-drinks per person had gone in to kick our own asses, the whole group went down into the true Gifgrond zone. This was easier said than done, as at the time that we had been indulging in the culinary feast, the dance floor had filled itself up with lots of fresh happy faces. Linda pulled me to the side by my chicken wing and whispered loudly; look! Lots of Gifgrond virgins!! I told her to not say these things too loud as it might scare the Gifgrond virgins away; we can’t miss them, it’s the new blood of the party!

DJ M from Enfant Terrible was on a festive mood, clearly happy that his friend (the other deejay) was ill & now he could rule the scepter of party music all by himself! All the records that he was spinning had been instant success stories; the Gifgrond veterans and the Gifgrond virgins danced shoulder to shoulder, tongues out and all smiles; what a miraculous feast this was!

I can’t really remember the order (because of slight signs of food poisoning & alcoholism) but do know that there was a moment in which Garçon Taupe took over the stage! What a talent, so grandiose; the true master of a spectacle! The artist had been shimmering in the underground with a very limited output in release form, but here on Gifgrond he had unlocked the brakes & went for a full on session with big beats, electro and acid infected punchlines! The audience went berserk, the neighbors furious; all good signs for a successful feast! 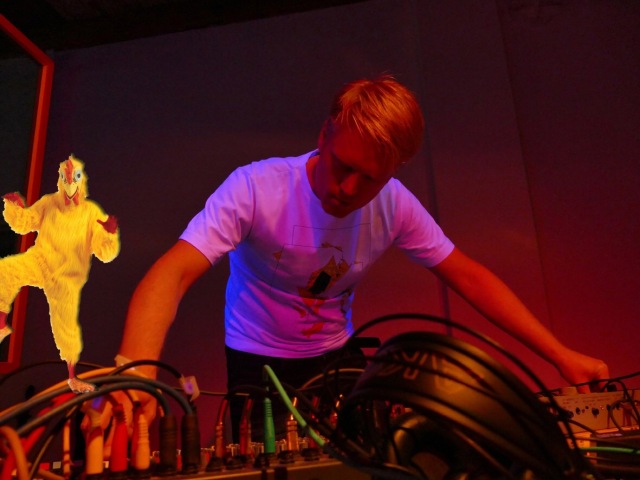 Matt Weiner came on with his synth driven work as TWINS! What a statement this artist’s performance was! The music was so good that nobody even noticed the farts coming out of every lucky person who had indulged in the spice of life that was the bean soup of A3! The fumes formed clouds through the entire premises, creating excellent effects that went well with the lights and the pounding music by this music genius!

Half way the elephant in the room popped up; it was the early festive arrival of the holy man AbSint & his equally appreciated partner Piet! They came for gifgirl Paca, not because she was naughty and needed a free holiday in the sunny side of Spain, but because they wanted to put her in the bright spotlight of the place that she had created! AbSint knows all, as he got this little red book you know? Piet informed the crowd about all the hard work, while AbSint offered his holy lap for Paca to awkwardly sit on. Apparently the red book didn’t inform that Paca would have preferred to sit on something else, like, uh.. a chair.

With lots of excellent excitement among the gifgrond crowd, it was told that Paca would go and take a well deserved break from organizing the Gifgrond parties, with loud appreciation Paca was given incredible useful presents; first of all a heartfelt traditional AbSint poem, a bottle of actual absinthe (one that she gurgled down as if it was a casual lemonade!), a original authentic piece of white underpants with lots of skulls on it & most importantly the special Gifgrond stamp; the secret key that allows her unlimited returns and always open doors to all that is the future of Gifgrond! 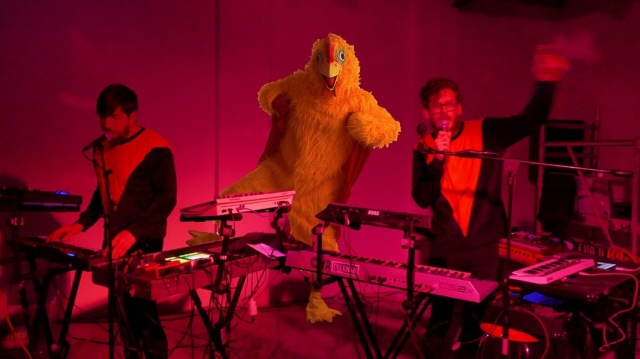 Somewhere along the spectacular evening with the honorable surprise guests; the synth electro duo Staatseinde had taken over the stage! With their retro futuristic outfits they really had a presence going on. They played like true fanatics on their synthesizers and used the microphones to spread out danceable pop with a alternative twist! The Gifgrond crowd went mental, everyone danced as if they all had been gurgling down a similar bottle of absinthe that Paca downed down so quickly! DJ M happily provided the rest of the night with a brilliant set of energetic infective goodies and so came the very intriguing & special 61th edition of Gifgrond to an end! Spectacular!
http://www.gifgrond.nl

1 Response to Gifgrond #61 the aftermath report