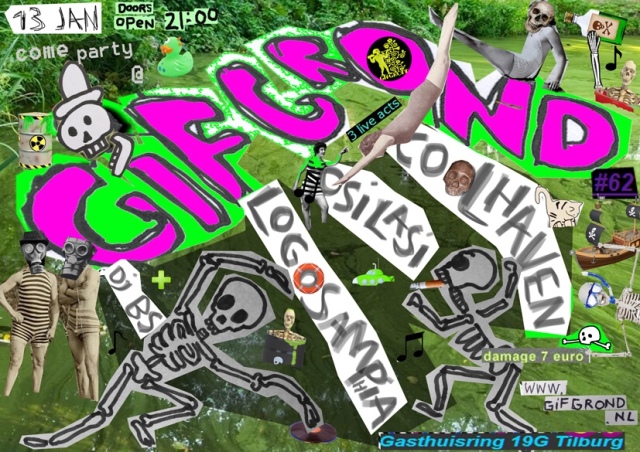 The impressive nights at the prestigious Dutch venue that is Gifgrond had another one to go down the history books. This was the 62 (!) ground breaking & shaking version of the legendary party and featured the return of classic friends like the classy Coolhaven , the widely known master of cultural freakiness Logosamphia and ofcourse super star DJ Bs! Next to these recognizable faces there had been plenty of new ones! Especially the girls of OSILASI (who stole the show (and later gave it back so the rest of the evening could continue enjoying it!) had been a great sight among the gifgrond newbies!
Looking at the flyers for the night, it was clear that it would be packed with fresh and old intoxicated faces! 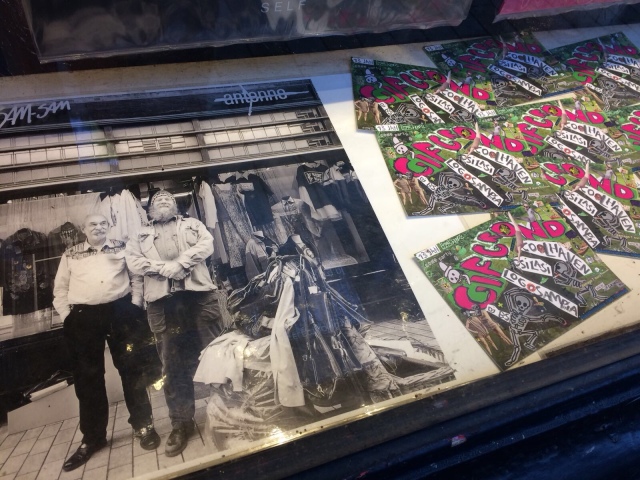 But let me start this report from the very beginning as that’s a good begin. (Hooray for a ‘the sound of music’ reference!) …
As a lucrative member of the prominent press I headed down to the only party in Tillywood that is worth anyone’s attention. I was a bit too early, as apparently the doors would open at 21:00 and somehow I thought it was 9:00, but luckily (even though the doors had indeed been closed upon my arrival) the lovely gifgrond lady T opened the door as if she had been expecting me. Slowly but surely the artists & regulars of the night (The head of comment and head of gifgrond Cake ‘Linda Pinda’ was unfortunately absent *breaking legs on a pair of skis* but the lovely faithful “Irrlicht project” was there!) dropped in for a communion time of drinking, chatting, cooking and eating. The atmosphere was good & so was the toxic cauliflower!

It was here that I had a fine little reunion with Gifgrond’s mega sound engineer, he was in a delightful mood and I congratulated him for always creating the best possible sound! It’s a great indestructible sound system that he controls, sounding all very clear and loud; without over reacting it’s the best my ears had ever encountered! In my humble opinion it really elevated and still elevates the gifgrond parties to absolute the highest levels of notable frequencies, a kind that wouldn’t be reached without, in at least a billion years! Yes, I shook his hand and thanked him from the bottom of my heart!

I could understand his cheerful mood as next to both sides of him, the fun loving Léa Roger & Célia Jankowski had been on a roll. The good humored duo that together form OSILASI had been all smiles, super relaxed and clearly enjoying the spicy food as cooked up by Marcelle & Hans (Koks)! 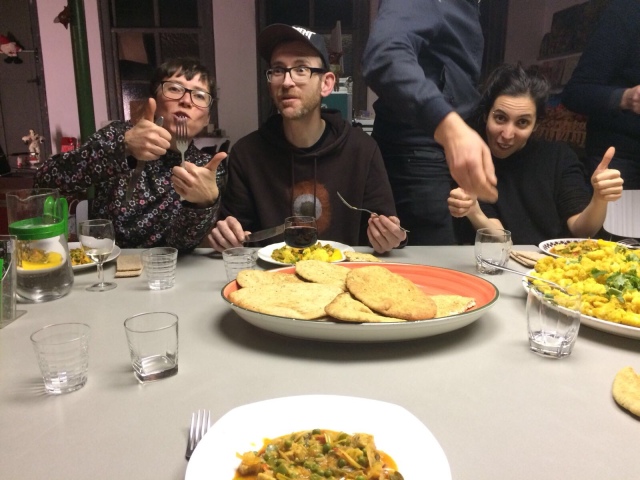 In fact everyone enjoyed the cauliflower meal so much that it became a hot topic of the evening! The arms and hands of DJ Bs and front row singer/performer Peter Fengeler from Coolhaven had a busy time making the food disappear from the table! 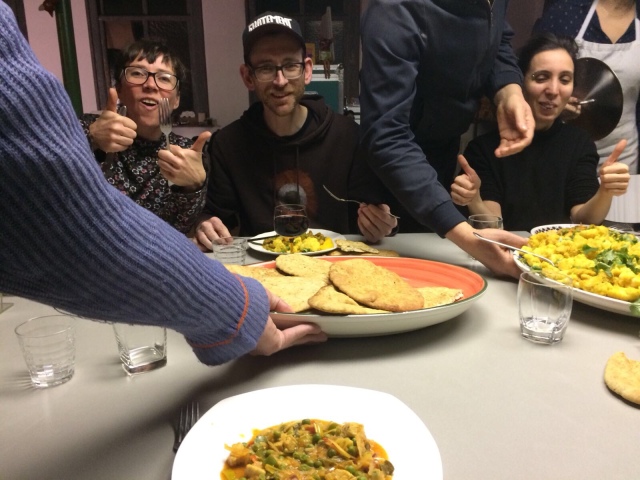 When the time was ready the Gifgrond area was nicely packed with a fanatic crowd, clearly the kind of people that had no problem finding the proud barman at his base & brave enough to engage in the act of slurping the feel good liquids of beer and Gifgrond’s very own toxic poison! With unsuspected expectations the cauliflower powered spiced up girls from OSILASI started to immediately impress the crowd! It’s fair to say that there couldn’t be a more spectacular opening of the feast among feasts! They combined authenticity and on the spot playing as if it was a music action game! On one side everyone was instantly engaged by the exclusive percussion, banging wildly the rhythms of the night in a wildly positive upwards way! 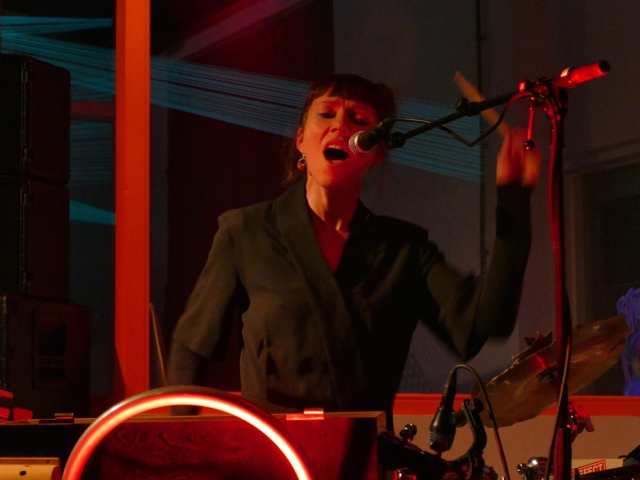 And on the other side it was a mega harp and additional sounds that mesmerized the audience with great delight! 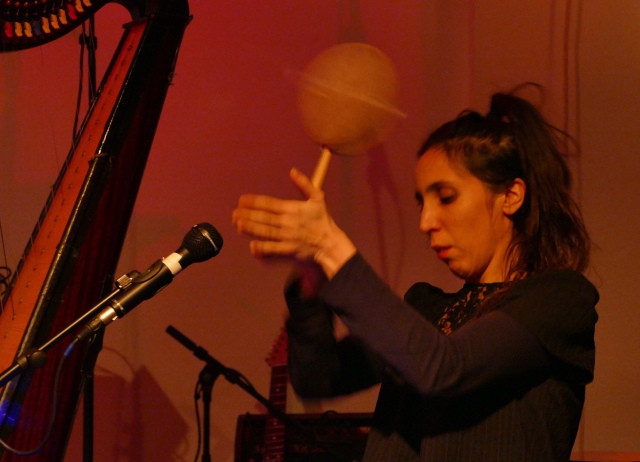 They sang, they created the noises, made the psychedelic tones that you could lose yourself into & the nicest thing was that they did this all with such a pleasant joyfulness! They had been obviously one with the music and for the entire time of their playfulness, it felt as if Gifgrond was their very own territory! Wonderful! 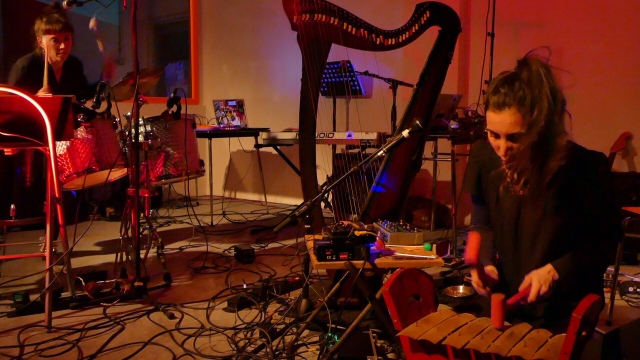 After OSILASI it was time for Peter Fengler, Lukas Simonis & Hajo Doorn to get the venue in their expressive claws! As Coolhaven they respected the viewing listeners by giving them a performance of a life time! They had grown their hair in French ways, put on their Sunday costumes on a Saturday and played a theatrical show that blended true punk with a nineties gabber twist! Peter really took the crowd by his balls, walking around with the strong charisma that could only be described as a modern day Tomata du Plenty! 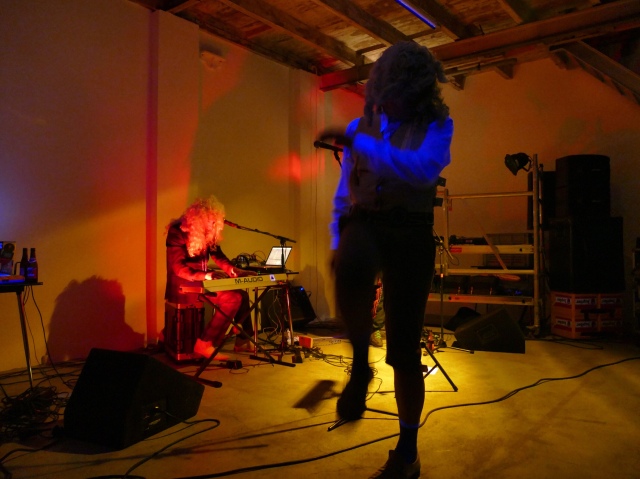 With faces, styles of attitude, funny walks and elbow work he had taken the audience hostage for the full duration of the set! With his fanatic words on beeps and guitar roughness the gifgrond ground became hotter than hell! 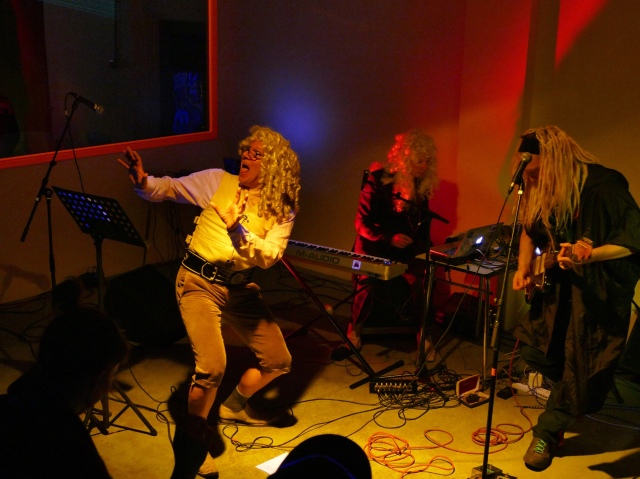 This wasn’t your average dada-pop Coolhaven show, as tonight they had been presenting their brand new 10″ vinyl record named ‘Rode Pruik‘. The record sold like hot buns and it’s not difficult to understand why! With its appetizing comic style artwork by Johannes van de Weer it simply became the apple of anyone’s eye. 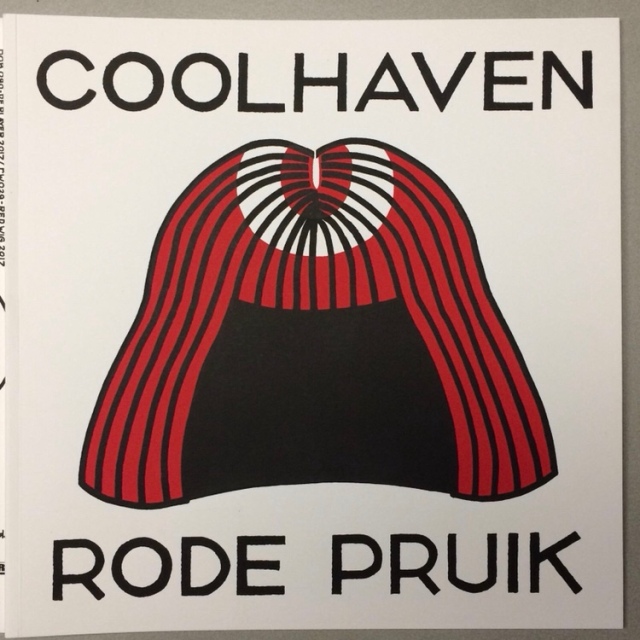 Johannes was a prominent comic artist roaming around the Rotterdam punk and squatter scene of 1980 & the prominent front man of the punk band De Rondos. This album seemed to be a tribute and a celebration as Coolhaven had put it full with covers and reworks of De Rondos and Tandstickorshock. 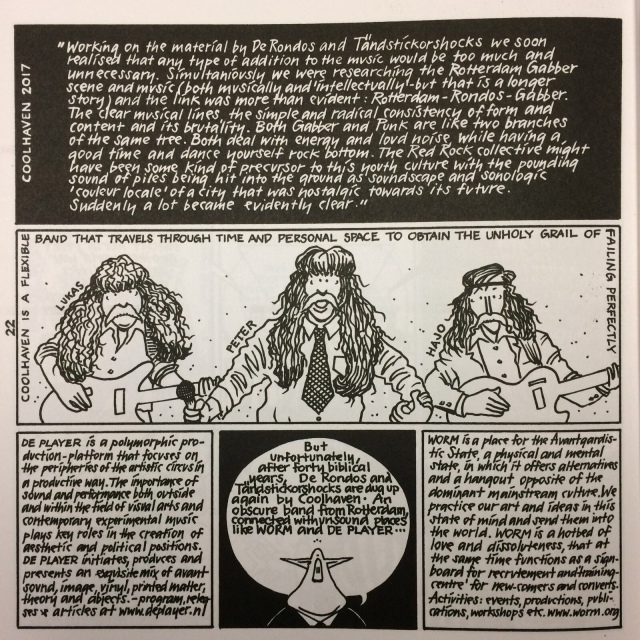 The slogan as found on the album’s artwork “please do not buy this album, it’s rubbish!” Says it all! Better get it before all of this extremely limited edition is gone! 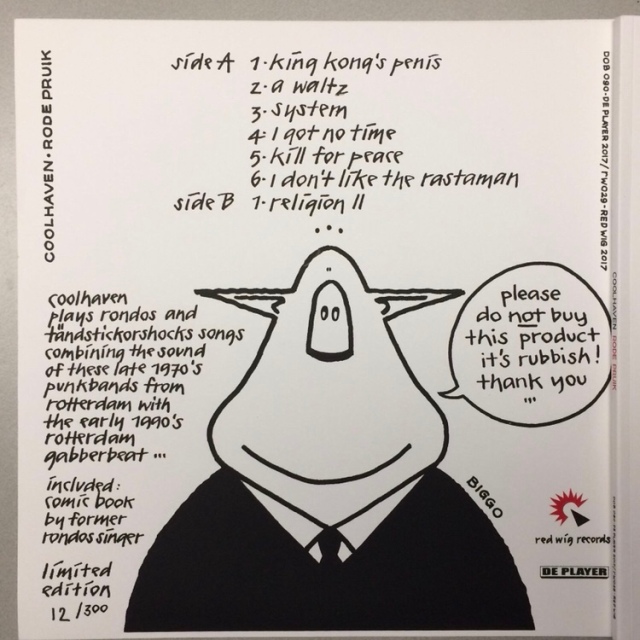 There was no point in calling the fire brigade to cool it all down, as after Coolhaven it was time for the one and only Logosamphia to provide the party vibes! With his excellent into-it persona he went full Arabian with enough electric freaky breaks to blow up the roof and possibly the speakers from our favorite sound engineer! 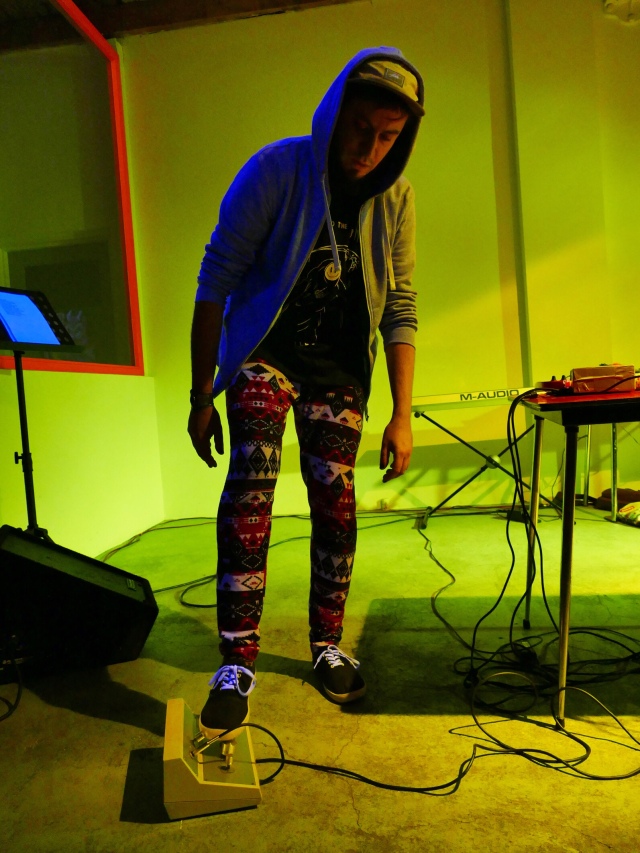 With Wild roaming spasms he brought tune after tune, perfectly resonating the vibe to miraculously make all feet go up and down & down and up again! The many gifgrond-goers had become a massive glowing orb of blended auras, all dancing fanatically to spread love among each other unstoppable triggered by what Logosamphia had to offer! 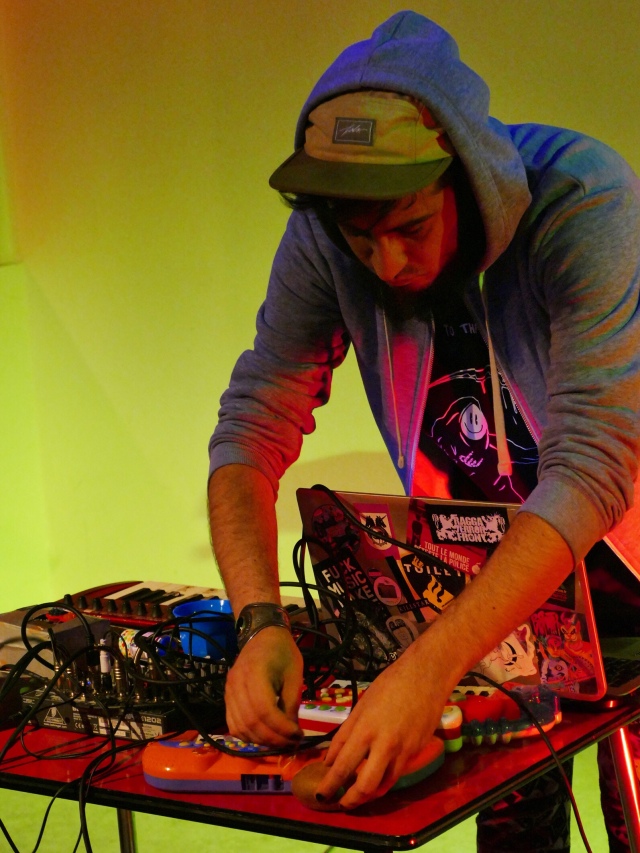 His set was ace and good and many of his fans and new sound lovers hopped over to buy his beloved ‘Prince’ album. You have to hear it as even the legendary Vader Abraham had blessed it with his singing smurfs! 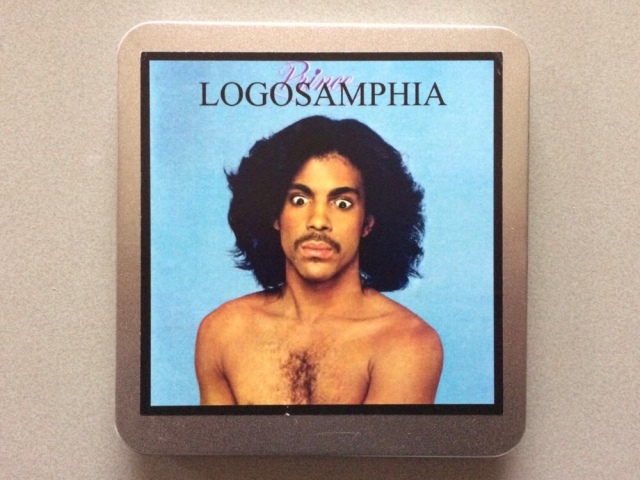 When Logosamphia made space for the world wide global phenomenon DJ Bs, the party was simply not only more than complete; it was on full stream! 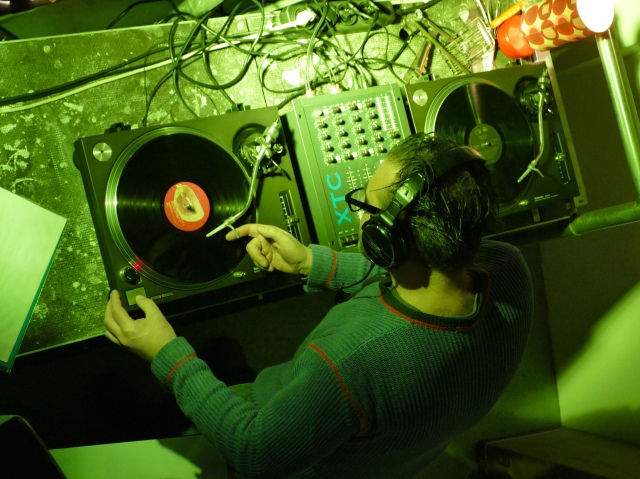 People clapped, animals danced, Frank Janssens filmed and made the ultimate photos of the night! (Bless you Frank for all the hard visual work as seen on this report!) It was yet another unforgettable legal party at this prestigious venue that keeps music, performance and geniuses together in a wave of toxic fun!

After a night of partying hard we look at our frequent gifgrond going party friend ‘Irrlicht Project‘ who crashed on his own reserved mattress in a corner & can announce that he will wake up in March for the next gifgrond party among parties! Be there or be a hair! 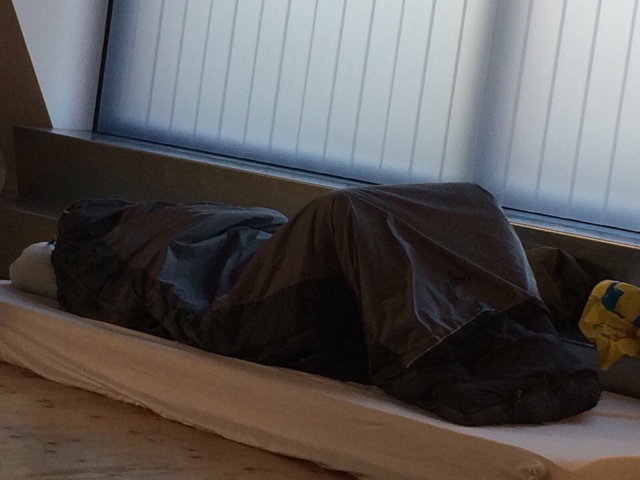