The new album by Max Lee is one that seems to honors its title name of ‘Colors of Noise’ efficient and direct. It comes across as a long player that takes a listener on a drowning journey, deep into a personal headspace with gifted experiments that light it all up along the way. The overall backdrop color of the sound (as a synesthetic listener) seems to be quite dark, but that makes the colorful sparkles that Max Lee has inserted much more effective to come out; almost as if it’s a safe firework piece of art that might be attended while wearing sunglasses, a possible necessity item for pure safety reasons.

It doesn’t come as a huge surprise that this album listens away like a flight within Max his head as everything that you can hear has been written, played, recorded and mixed by him. Does that sound like he must be a very busy man? Yes, but it also sounds like a very creative and talented one! 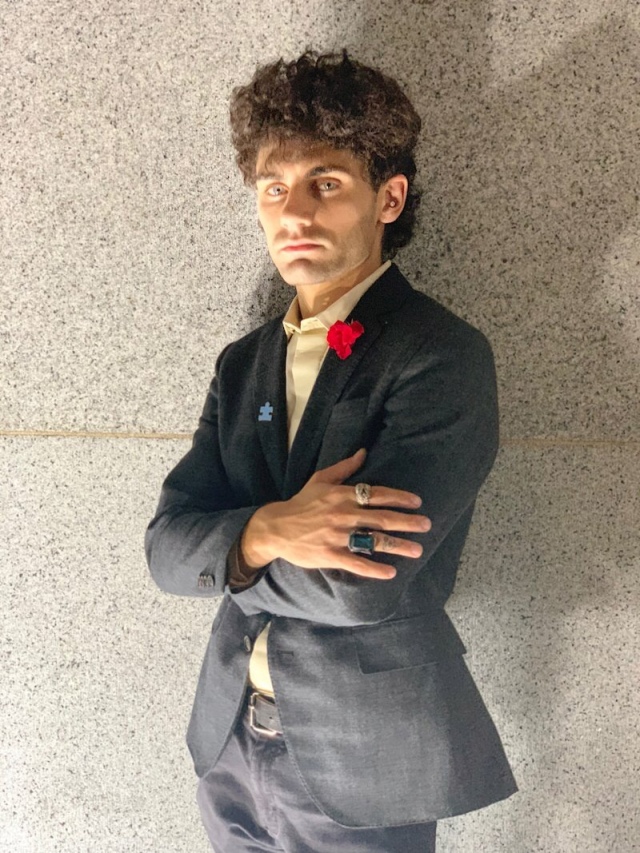 Max Lee (the one and only!)

It all starts with a easy opener that will easily drag a listener in from their own world into the one that this artist wants you to be. With swaggering voice as if it had became raw from a night out, he suddenly throws us on the bus for a swanky ride, one in which we can sit and bump around in his tormented musical brain. It’s a compact and intense start that feels like us being thrown a portal that leads up to the rest of the album. It hijacks our time with a raw brownish glow, dark beer bottle green and bright pink; all comes out thanks to a sick sounding guitar and rock n roll drums supplied as if he is the drug dealer and we are the potential new addicts on the block.

The song slips into a short faithfulness that is named ‘no debt’, one that feels like a honest moment of waking up after a full night partying. With a kind howling guitar production and a electric stiff beat that he uses to shape up the ‘easy morning content’ that feels almost like a ‘feeling sorry’ song for himself. The colors of music here are sunset ones, things like a light blue, orange, little sniffs of yellow and a fancy collage of pretty uprising bits of white light,?while still playing around within the darkness of shadows. It’s quite visual, indeed!

It strolls easily into the dramatic, but pretty sounding song named ‘OPEN’. The production is gorgeous, making the music big as it floats up with wonderful piano progression, a collaboration that goes hand in hand with Max Lee his voice. It’s as if they are the best close friends that know each other through and through. It all goes up like a flying kite in bigness, yet I wished it would stay up in the sky a little bit longer, just to make me enjoy the pretty flight more relaxed and peacefully. The orgasmic rainbow colors as depicted in this song are just too beautiful to be so shortly lived. But yes… Max Lee has obviously no time to hang around , as he clearly has lots of music on his chest, all material that needs to find a place into this personal tour of expression.

In on of the one minutes to spare he rocks out a short snippet of a potential hit named ‘where is the garbage?’. It has that kind of catchy riff and nice lines to make it one that is replay worthy, Max hangs it easily into the melancholic ‘into the trees’ sound of The Cure, while still keeping that uplifting vibe of wing-like flying: it’s a excellent combo! From what I could hear I could see that the Colors are bright and forest-like and with a little imagination you could even add the smell of moss to the listening sensation. This is clearly not just music, people…

It goes quickly into a track titled ‘History’, one that also lets out a whole assortment of colors into the ears & yet keeps it’s to my taste way too short to fully explore the potential of this color palette. I know Max Lee’s hat of tricks is pretty full and all are in need to be pulled out for the entire show to be one, yet, it still feels like a rollercoaster of flabbergasting works that gets paraded by a bit quickly. The only way to fully appreciate it (as i think it should) is by hitting the repeat button, just to feel those sunburned strings fall into place, embrace the bass that sounds so lovingly slappy and warm, be one with the energetic pulse of the all-round song that is up and sleepy at the same time; it’s a bit like a active dream that kindly recharges you.

Another super short, but kind hearted moment is the song named ‘could be’, it sounds heartwarming and intimate with a breaking emotional voice, a synthesizer sound and s laid back kick that goes in like a personal ear-pleaser. It’s so nice that it yet again feels like a sad moment that it disappears so quickly. Luckily it moves smoothly into ‘2livealife’ which feels very connected, with a similar honesty and sincerity vibe as the previous song. It had that electric pulse that feels a bit like a song of Radiohead but comes across as much more like a one-on-one personal experience, with Max Lee almost whispering himself into the music, licking your inner ears with his tongue, slowly morphing his touchy voice into the colorful shape of a dreamy butterfly, leaving a trace of glittery sparkles and shiny radio frequencies behind its tail. That’s really nice, isn’t it?

The song titled ‘The Key’ is from a different order, the music over here is bulky and punchy in sound. It stands like a house, one with sturdy red bricks and sweet mopped wooden floors; the drums are tight and real, the production is quite overwhelming… but that’s a good thing! It comes across as if we had stumbled into a music venue where the music is loud and the crowd is silently bopping their heads in a enjoyable agreement. The vocals are especially bright and powerfully kind over here, it’s as if everything seems to be pulled out of Max Lee his cupboard, all to get its magical point of music artistry across. The transition of this song to the next one is smoothly glued together by some atmospheric sample trickery that was probably needed, as next track ‘C U Again’ feels like a what I would call a ‘later-on-the-night’ kind of expression. It has those bright blurry lights that lighten up the dark intoxicated room kind of vibe, one in which it seems as if the expressive music feels more colorfully drowned out, something that can be compared like a drunken encounter that might have ended up in a friendly sparring with the fists. The music finally gets the time to come alive, something that throws with a certain anger that feels raw and realistic. You got to love it!

The album goes on with ‘SXE’ which is bulky and very thick in bass and sound. It’s as if we have arrived at the next day’s hangover. You just want to go for that cup of tea, pop some paracetamol and flush down a raw egg to conquer the consequences of last night’s binge drinking, yet in Max Lee’s music form it also seems like something that makes it all worth it. It pops into a work that has the enigmatic title of ‘Forever’, this one also sounds nicely spaced out while still holding onto a uplifting pulse that Max Lee kindly sneaked underneath it; color wise it feels all bubbly red, as if we are invited to look through the glass of a full bottle of wine.

I think Max Lee do-it-yourself work has payed off, he created a continued story with his music rolling from one moment into another, yet they all seem to be connected in all the right ways. The two minutes spend with ‘painted eyes’ is one of the more glued-on experiences that feels kinda blue,a bit fowl and drowsy. It made me think of the color of whisky, while the music soothed my liver much better than any alcoholic beverage. It’s funny that my ability to see and experience colors while listening to ‘Colors of Noise’ have been either booze or climate related…

To continue the mission I listened to ‘Never going back’ which felt like a resting place on the album, a relaxing zone kindly decorated with a loving kindness as placed by a fine authentic strumming of guitar and a case of no nonsense singing. It comes across as the one that refrained the most from special effects and top notch recording techniques, which makes it one of these authentic goodies that probably could be executed live as you hear it, really making me not experience colors , but more visualize the artist himself in front of me, standing there while being real and honest.

After this is is a song named ‘BTWN’ which has this fine rolling fatness combined with singing and lush synth sounds, also electric guitar is added to give it the punch that makes it strong and real. Thanks to finger-licking piano bits it brings the right balance of bald and thin to the color palette. I love how exposed Max his musical personality is in general, but especially folds out in tracks like this. He sounds as if he is singing his personality within my brain, making it a true personal encounter that makes it more than just a music experience. He has put his heart and soul into all the facets and you could easily hear it paying off. ‘How i feel’ is another great example, in which he is one with his work, full of tiny details, soulful touches of instrumentation, interesting effects that makes it more like a audio painting than a normal song production.

A little bit of crunchiness in the fuzzy beat gets ‘Touchthestars’ grounded, while pretty riffs and sunny emotional vibes make it shine out like a rising rainbow. Too bad, it’s so short, but than again maybe all the songs on this album have been more intended as one, all interwoven within each other to form a smooth togetherness. Even the dirty nirvana sound that comes out in ‘part of everything’ seems to be able to be sneaked in without worries, it all feels like one man’s Magnus opus, one that is made with a lot of love, affection, eye for detail and lots of stories to tell.

You can find this album on Spotify or on Bandcamp:
https://themaxlee.bandcamp.com/album/colors-of-noise
<KN>