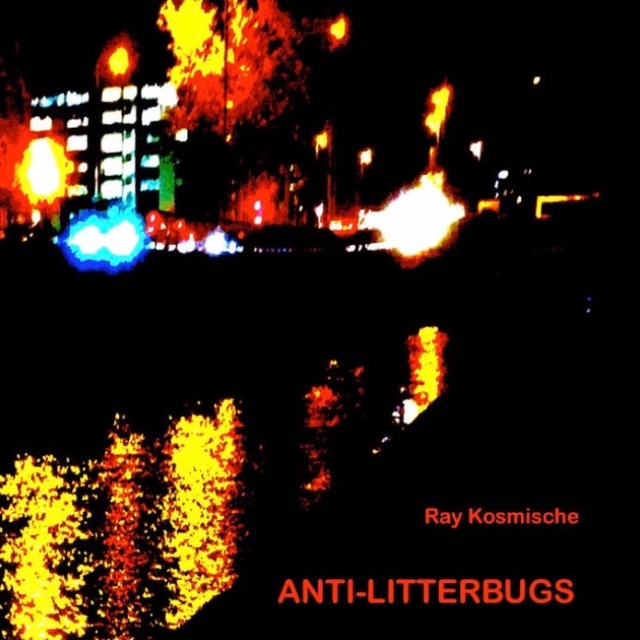 Ray Kosmische comes back with a case of Anti-Litterbugs. An all over the place but reasonably relaxed album with a title that made me think of creepy crawlers. It immediately begins to itch by the thought of having to deal with anti litterbugs, but as soon as you actually tune in and hear Ray Kosmische immediately rambling about something entirely else; the act of urinating on a ice cube : the itchiness instantly seemed to have made some room for a view of a personal science project that (I believe) nobody had signed up for to see. Luckily it’s just music and it’s view Is easily overwritten by a next song.

This one is ‘dragon sword’ and calms the fear for bugs even more down, wiping it all away and even the previously vision of ray donating his warm body fluid on a melting ice cube gets replaced with a cult like peacefulness. It feels as if we have ended up somewhere in the laid back corners of the electronic seventies. When Ray Kosmische starts to ask ‘where ya roamin’ too’ the chilling peacefulness really seem to have established itself, as he sings so kind and the music just compliments it in a sweet feel good matter.

This trip of sweet spliff friendly music that helps its way in for a clear case of relaxation seems to continue on the rest of the album. There are no bugs or anti-bugs to be found or heard, but as the vibe gets more and more psychedelic, you could imagine them as by effects for the severely tripped out. When ‘sound command’ plays the album seems to flourish in sound, making me think of the Beatles when they took too much LSD and became artistic avant-garde explorers while still very much being unlike anything I’ve heard before. A great fun trip that even seems to have Elmer Fudd on board!

After the epic adventure Ray Kosmische picks up his stringed instrument again to sing a calm song about water. It’s as if he could have read our minds; popping too much acid will make you kind of dehydrated & listening to the precious track feels as if we had taken tons of it. The rest of the songs keep it reasonably calm and easy going, with a warm sound of gentle singing and strumming we can all feel safe and slightly sane. Don’t judge a book by its cover or in this case the title, as nicely enough I couldn’t discover any tiny legs of bugs (or anti-bugs for that matter) infiltrating this musical area.
https://raykosmische.bandcamp.com/album/anti-litterbugs
<KN>