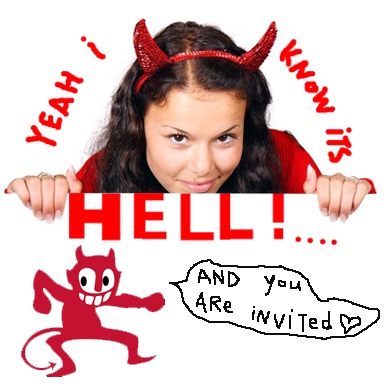 Hell, as many would probably describe it – seems to be this place in the deepest depths of the earth’s ground. One in which everything is hotter than hot, so much so that it would be idiotic to wear clothes if you managed to make your way down there. They simply might become a fire hazard while still being around your skin; an absolutely dangerous and terrifying thought indeed! But there is more… a hole filled with lava in which vague souls doing some immersive suffering & of course the legendary devil who comes all in red, horns on its head, a long tail and a hot poking poke to make the new arrivals dance for its own kind of joyfully sickish entertainment. There is probably more, but I guess that is the common idea of Hell.

Another idea that I heard was that Hell is the place to be, one in which all the cool people go to. The kind of place that is a full on party with happy sinful things like sex, gambling, laughter, booze, dancing , experimental happening and oh yes good music!

But unfortunately I’m no expert. I don’t know which one is the real one. It might as well be a completely different thing. If someone visited hell and came back to let us know – please do so. I mean the risk is a thin line between horrible pain while burning in the flames and a feel good party among soulful sinners.

But why this writing about Hell & why here speculating about it on our humble music review blog named Yeah I Know It Sucks? Well… how can I say it lightly? I think I’ve discovered Hell in the Hella hellish option and you don’t even need to go to the after life to see / hear and witness it. It’s hell on earth, available through the modern day portal of YouTube : the video sharing site that brings Hell to everyone with an internet connection – that is – if they are brave enough to click ‘play’ on the following video. Are you that person? Are you the courageous explorer that wants to go to hell as in a place of sheer horror and torture?

Don’t forget to put the volume up, your eyes open as you reach the peek of extreme suffering, of tormenting yourself with the most toe-curling world that is much, much, much worse than all the scaremongering hell stories that have gone around for centuries. Yes, there is the devil-character but he is entirely different than expected. Although he has a red nose! I didn’t see no fire, minus the flames coming from a irritable happy looking sun-demon… but it is Hell nonetheless. Are you ready for it? Prepared enough to face the doom that can’t be unseen or unheard? Don’t blame us when it traumatize you for the rest of your life… we just have to share this so we can keep our ‘reporter status’ on (talking about Hell) Facebook. It was nice knowing you – now face your doom and don’t say we didn’t warn you… this is Hell that you can count upon – it exist and might make you want to poke your eyes out and your ears bleed! Hello Hell: