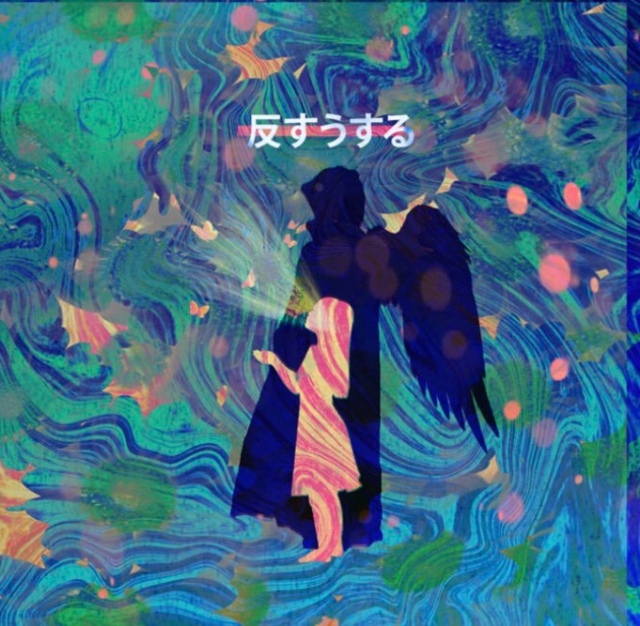 Be careful when you decide to listen to this album with the pure innocent angelic creature on the cover… there is darkness looming over it and it might just be out to harm you in the most closest way possible. Hearing it is something that you shouldn’t take lightly and comes (of course) at your own risky risk…

The first part of the strange world crafted by VerticalKatana consists of melodies played out in various tracks that all seem to have a similar effect, something similar like some kind of slow working chloroform for the mind. With an alleging mysterious allure they will guide us through strange surreal places in which nothing seemingly seems what it is. They aim to slip us all in some unnatural sleep in which they could play tricks within our dreams. Don’t ask me how or what they will do exactly as I have a hard time fighting off the tranquillising powers that this album contains. They want us to pass out and than grab us by the inner core with distorted sound ready to lid everything up in flames.

Sometimes I wake up seemingly screaming, as if a kind hearted nightmare had attended the unconscious state, at other moments I felt much more relaxed and pleasant. But trusting this music completely seems to be an unwise thing to do; there is something roaming around in it and it slightly feels as if it’s something of an evil kind, maybe it’s heavy metal – taking advantage of us being taken into a dream state so it can roam around in our heads like an irresponsible deity that likes to play tricky games with and within our mind.

It’s a scary thought to have a stranger walking around in your most secure and vulnerable place, the area in which imagination and thoughts are dancing together as you lay down in a vegetable state. Sometimes I open my eyes and notice a creepy creep playing with the contents of my brain like a tricky trickster, Its than that I noticed the dark sounds intertwining themselves up with pleasant things; easily screwing the system up by glueing the happy sound of singing birds with something of a devilish kind.

It is very hard to explain, as the music keeps on doing its best to convince me that it is all alright, that it’s okay to let go and fall asleep; yet at the same time the scary sounds might pop up just in time to grab reality just before it’s all too late. It’s like a challenge that fits the concept of ‘if you snooze you lose’ but I feel that if you actually snooze you might never return back into the same happy sane person again -> the music might reprogram you to turn your life upside down into a living nightmare. It will hook up pleasure with panic coming from secretly induced heavy distorted guitar riffs, banging bits that sneak upon its seduced listeners as if they had been popping out of nowhere, almost like little naughty creatures that love to get to you when you least expect it.

Maybe it’s good to hear it all in day time without the extra natural sleep kicking in – although I still think that the musical chloroform will even succeed to win the battle in the morning after a few cups of hardcore coffee… the last track (by the way) seems to act like a kiss on the forehead, a plaster on our fresh mental wounds to wake up to and believe that nothing evil had happened… maybe I’m wrong, but I’m not really sure if I can actually sleep peacefully after properly waking up from this experience. Behind the cute friendly innocent looking angel might hide an dangerous shadow with dangerous tendencies! You have been warned!
https://verticalkatana.bandcamp.com/album/nescient
<KN>