Are you ready for a little report? If not – please move along. If you are? Well walk straight in:

Under the watchful look of the London eye, hidden away from the busy Waterloo bridge filled with euro tour buses driving around like maniacs to deliver their travellers before the brexit shit hits the van. Somewhere hiding in a complex maze of tunnels in a fat alley in which darkness gets slightly lid up by some dim lights. There, at the end of it all, a secretive art collective place seems to have been setup to rule the earth. In one of the buildings there was a busy evening planned, fully packed to battle the council rules of closing times and permissions. It would be a huge challenge with four very different eclectic acts on the bill, ones that even your humble reporter would be a bit taken in by! It was time for IKLECTIK presents, CLUB INTEGRAL.

A look around the early crowd was like looking around at pieces in a museum. There had been the prominent hair pieces, the special ‘whose who who knows who people, the dinosaurs and happy go lucky mixed bunch of various looks and sizes. At first the weirdoes gazed around, strong stories got exchanged while they enjoyed to refuse eating lovely sushi supplied by the first performer of the evening. But than, packed as it was: it was time for the show to start! Jesus was seated firmly in his seat and had of course the best place to sit upon. The announcer announced Rita Braga and a full on eruption of the excited crowd filled the air!

There she was, introducing her new instrument which she forgot to tell the name for. Would it be Hank? Marie? Jill? It wasn’t important as the only name of importance on the busy bill was of course Rita Braga who played her instrument as if she had it in her hands for many years. She played two songs that the fans of Rita would probably know and could have heard off!

The first song from her wonderful cd ‘bird on the moon’ was an instant favourite in my book, but also others that she later performed with her wonderful keyboard machine rang all of my bells. It was so nice to hear Rita again, especially now that my ears and brain had been accustomed to her songs by (on request of children and myself!) her album playing forever in the car and binge strolling her music videos on YouTube. When you have a one year old crying in your ear and a connection to a YouTube thingy I highly recommend to watch the video with Rita and cartoon characters; it helps to fade out the crying each and every time!

Rita Braga did her set with full on enthusiasm and skilful body and arm movements! It is always a pleasure to see her disarming the tension and enjoying herself. She even played the ghostly song, which might be one of my personal favourites on her cd.. in any case it was a pleasure to hear and see Rita in all her action & when her set was finished I was satisfied enough to go home immediately.

Okay, I stayed. Not because I could be possible be more satisfied, but out of politeness towards the organisers, the other artists and of course to give a good example to the audience. So there I sat with my new buddy whose name I had immediately forgotten. A funny man who seemed to be there for one act only, which was the last one of the evening so he would be a steady audience member for all the other acts. That sounds like an easy job, but Jesus had left the building after the second performer. I guess he came for Rita and got inspired after hearing the set of Neil Luck to probably going out and try his own luck by trying to walk on the Thames.

But let’s get back in time in which Jesus was still the prominent middle point of the eager audience! The anointed of the evening had a sparkle in his eye when announcing the performance by Neil Luck by praising him into the air like a super star composer! Which of course he is, but still announcing it might be placing a lot of pressure on the artist. But lucky for us and the artist himself; Neil Luck had no problem to do his artistic thing. It was one of the acts of music that I had slight trouble with in understanding and comprehending. It was abit like going into the museum of modern art and staring at the work while figuring out what it was about or I don’t even know why exactly as I must have heard stranger things here on our regular yikis channels. Still I was confused as noises blended together with something that made me think of an open mic night, but soon the things twirled a bit more into each other making it more clear that the audio noises hadn’t been part of technical failure, but had been all part of the plot.

Pretty things erupted and went, weird spoken word played out along with guitar and transformative soundscapes. All happened quite quickly, while it still being the kind of music that probably would feel right at home on your ears when laying in bed ready to go for a relaxed nap while the music and words try to place some guru-like new age materials in our subconscious mind. At one moment Neil Luck mentioned something along the line of “imagine, sitting on a old sofa” which was the part that blew my mind as I not only imagined it, I also in real life was sitting on a old sofa. Unbelievable! Don’t know how old it was but I’m sure it wasn’t brand new.

After Neil received his rounds of applause there was a little break, a thing that happened after every performance of the evening. Bringing the kind of ritual clearance of repetitions that they so happily have had chewed out in the concept of the Teletubbies. After the break there was another act that I was not prepared for to hear and see, but this was a nice melange of melodies and vocal harmonies. This was coming out of Maya Yianni and her two companions. She introduced them but as I’m equipped with the memory of a fish you have to forgive me for keeping those names all too myself. Their music was lovely, even though the choice of songs had been on a road made out of mostly sad love ballads, still it was wonderful and harmonic. At times I could not only just hear the music but also feel their vibrations filling up the place and everyone inside it. Even though they had been (unlike Neil Luck) struck with some unfortunate technical issues they kept themselves together and brought what could only be understood as a perfect performance, maybe even too perfect? Although I strongly believe that there is no such thing as being too perfect! What a lovely vocal performance! 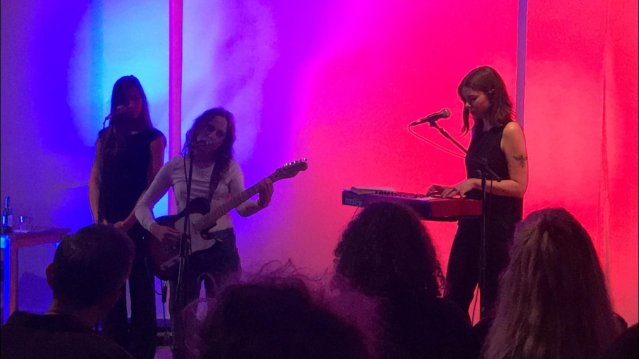 After them having received their cheerful standing ovation and yet again a mini break, it was time for professional nutter Manu Luis to take over. You could feel the excitement in the air, people not yet knowing if they had to sit down or stand up – that kind of thing. The sofa buddy was in his finest element saying things that would feed Manu Luis if he would accidentally hear it. After two relatively sleepy performances I was in such a need to unleash some energy that The know how of Manu Luis skipping all his romantic love ballads (minus one?) to plinky ploink his way in some frantic material to easily dance upon.

With funny background videos of people doing gymnastics or doing some epileptic folk dancing it was as if Manu Luis showed the mostly seated audience how to actually move and react to his music. Unfortunately nobody stood up to form a circle and follow the instruction videos, or hopped around like people at a happy funeral. But that didn’t stop me from attempting, going for a radical chair cleanup and a silly dance for everyone to jump in and enjoy! Manu Luis gave it all, his face became red from forcibly throwing his words in a microphone that he had to held far from his face! Almost like a Whitney Houston that knows the loudness and power of his own voice and how to get it in line with the rest of the music.
This music was aimed and made for dancing as Manu Luis paraded by his whole load of hits that you can find in digital areas and on surprisingly good looking vinyl and cd! Even on YouTube! His recognisable face brought a mixture of humor and confidence like a self described wedding singer who dipped his fingers in an Eurosong festival full of trash and made it more consumable and party-like!

It was a strange melting pot of music, art and performance there in the hidden maze among the tunnels. But it was a nice eclectic evening with enough things to ponder about and plenty of reasons to lose some calories, ponder your mind and for fans of the artists an enjoyable feast of recognition!