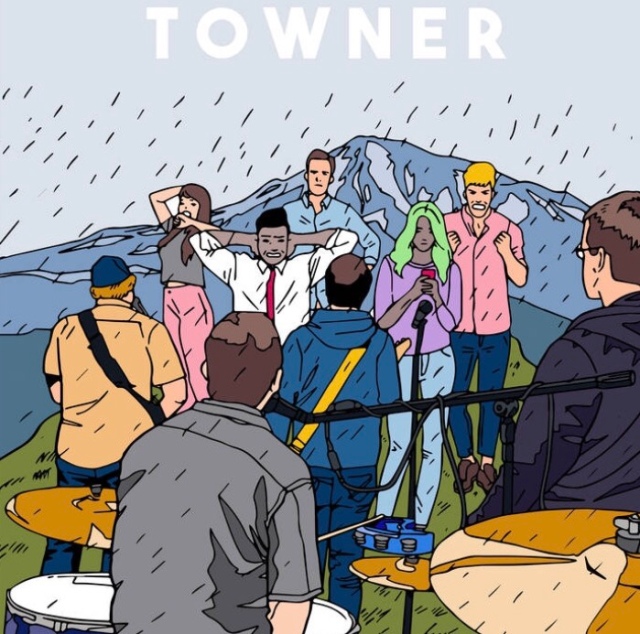 Towner send in their EP in digital form for review, it’s nice of them as that saves a lot of storage space for other trash records to be stored in. However it must be said that the cover looks very nice and I wouldn’t mind it to be on the wall. The colours are bright and the whole picture of a terrible band playing a outside gig in the rain for an non appreciative crowd simply got something that would fit our concept. Maybe it won’t hang in the hallway, or in the director’s office but it certainly would flourish up the boring toilet room.

Music wise, I’m scared just by looking at the artwork and reading the keywords. I just don’t want to be feeling like one of those cartoon characters that had to close its ears while standing in the rain while a band of persons in the middle of a midlife crisis are doing some kind of ramshackle performance that nobody seems to enjoy: but than again, open mindedness is always a good approach to everything & who knows, the artwork might not be the only good thing of this record… Besides it’s just an EP so how bad could that possible be?

I took a deep breath in and out in order to face my biggest fear of possible music that I could dislike, went into the specially designed listening room and played this EP. It started with something called ‘freak in common’ and I immediately tried to open the door again to run out in fear. But unfortunately for me and to great hilarity of some of the other yikis employees, the door got jammed by a well placed broomstick on the other side. Terrible singing came out of the speakers along with those guitar rock thingies that reminded me of those teenage bands of the nineties who clearly had gained a bit of weight, a little life experience and yet are here as if they all got that brewing energy of young skaters that didn’t crack all their nuts too many times in their growing up process. I don’t know what they had been singing about, probably didn’t care much either, but I could clearly see that the artwork artist clearly had been listening to this music too as the drawing clearly had been truly inspired by it. It made me want to give the artist a hug, wanting to give plenty of Kudos to the artwork person, for basically doing the review for this EP in the shape of a single picture. Amazing!

Still full hope I calmed down and automatically listened to the next song, one named ‘these words are yours’ and upon the first tones I immediately tried to push with my full weight and power , bashing my bust against the door of the listening room as hard as I could. It didn’t bounce, break or move the slightest bit. I had no choice than enduring the entire song, or whatever it was. It had more guitar things, a bit of electric distortedness and more of the singing that gave me the fresh idea of bashing my head into the door in order to either get it open or just gain so much brain damage that I could finally appreciate all that had been happening here. The singing style, the voices, the ways of ask and answering just made me wish I was locked into a toilet cubicle instead of our luxurious listening room, just so I could stick my head in a toilet bowl , flush it and listen to a instant waterfall while attempting to drown myself. But than it downed on me… maybe this was the music that yeah I know it sucks needed to keep in touch with its name, maybe this band (or whoever that had send this EP in) knew it would suit this name so well, so much so that it just had to be send in! After all a band with such an all telling piece of cover art must be very aware of what they sound like…

With a fresh mind half mumbling away in semi artistic mumblings I listened (at this point) very involuntarily to the third track on this EP. This was named ‘Calm Down’ and even with the best and greatest intentions I started to cry, while banging with both fists on the inside door of the listening room. I cried so historically loud just to wipe out the song with a full on whaaaa! I shouted as loud as I could in a full blown case of true hysteria ‘LET ME OUT!’ But my calls for help went unanswered. The music drove me nuts, I can’t even say exactly why but it felt nasty, it probably had mostly to do with the way of singing; it just felt soulless and vile, no tiny bit of beauty in there, not even for a millisecond. If this music had to be described as something other than music, I would say it was like a pimple that you would like to grate off from someone’s face with a cheese grater. It makes me sad, as I love music, & some nice pimples are a joy to squeeze out, but definitely not this one… how awful!

‘Moving Target’ was the last song to endure before the broom stick would be removed by my nasty colleagues on the other side of the door. At this point I just sat down with my fingers in my ears, staring at the man with the red tie on the EP’s artwork as I nodded that we had something in common. There is no mirror in the listening room but I’m sure my face (at this point) would look distressed and in pain, I double checked if I had still hairs on my head as this was the kind of music experience that I presume had the energy to turn it all grey or simply make it all fall out. In that case it was actually quite tremendous as it’s not even harsh noise, yet it felt as if life had drained itself out of me in the short time length of just four +_ 3 minute songs.

Once the music had really stopped and the door finally got opened I stared my colleagues right in to their eyes, their laughter quickly made room for terrified faces as I shoved them all in a unpredictable form of pure rage into the listening room, blocked the door with the broom and played this EP to them as loud as possible! It made me smile, making me feel slightly better while experiencing the sweet taste of revenge. It did come to my mind to press the ultimate repeat button and leave the colleagues there all day and night with this EP on repeat , but than again; nobody deserves that, not even the biggest frenemies! I let them out after the last song played, gave them all a big gigantic hug as we all felt defeated and drained together. But… We all agreed that the artwork was great.
https://towner.bandcamp.com/album/towner-ep