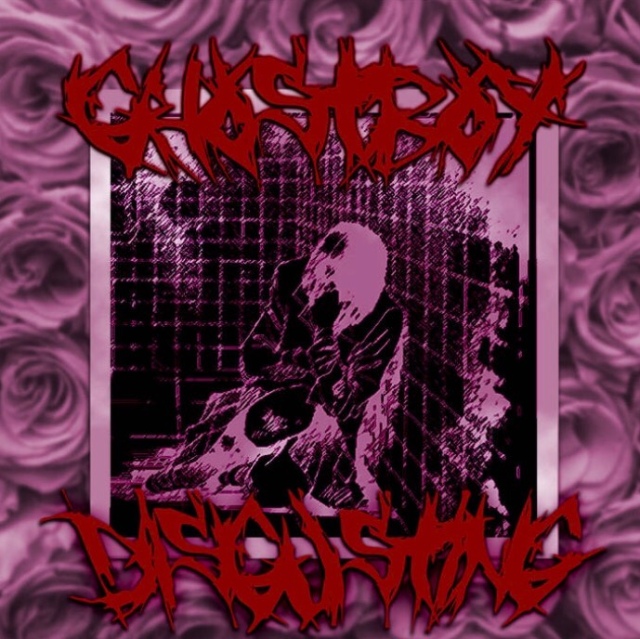 After Bill Cosby playing Ghost Dad and the verdict of him being guilty of disgusting things, it’s good to see that GHØS†BØY isn’t at all like Ghost Dad, or at least that’s what I presume over here as to be honest I do not know GHØS†BØY well enough to judge this character. It’s also probably not really my task to do such an analysis , but somehow listening to music for a report can’t really go as a standalone thing in my book; I need to know who is behind it, what the idea was about it all and why they do what they do.. I can’t help or exclude this curious curiosity!

GHØS†BØY did name this EP ‘disgusting’ and seems to have some kind of theme going on of promoting the devil. I say this as the price for this release is 6.66 pound on bandcamp, which might be a coincidence but if not, clearly a little fun way to bring the legendary mark of the beast into it, plus the prominent display of a hexagram on GHØS†BØY’s shirt worn in a gloomy scene in the video for a song named ‘destroyer’ also keeps brightly hinting the goat lord in my mind as I try to hear clearly what it is all about.

After a few minutes of analysing I can fondly say that GHØS†BØY is clearly not related in any way to Ghost Dad, or the actor who played it, plus seeing the cross inside GHØS†BØY’s name not being upside down, the whole devil thing might just be something that is just a coincidence. And if not; that is probably fine too. I don’t like to bring words into it, but in this case it’s best to see what had been written on the release page just to get a better view of what it is all about:

—
Disgusting is a horror inspired EP about surviving trauma and the mental illnesses that come with it, which features the Elvis Presley cover “Always On My Mind”. Influences from Dark Ambient, Pop, EDM, & Trap combined to create its own unique sound.
—

See, no hail Satan over here! Just Elvis Presley reincarnating! Believers and beliebers can all relax now… it’s all good, you are safe to enter and hear this EP without instantly becoming known as a devil worshipping sinner. Phew!

But how does this all sound like if we forget the text quoted above? That’s a good question which can be easily answered by listening to it. I would call it emo sad core, not sure if that’s a genre that exists, but if not, it’s a good moment to get it into reality. The track ‘destroyer’ is clearly the single, having a melodic happy sadness thing going on, with GHØS†BØY singing as if he is alone in his bedroom after a long night out, lots of crying and now all humbled out to give the melodic bits an human sadness that feels sensible and actually quite pretty.

To be honest I’m lyric-wise Not really sure what GHØS†BØY is actually singing about as the words come over as a soulful instrument in the mix, making me feel as if we are locked in a hug in which the meaning of words had become little bit less important than the emotion of sound that lays sighing within them. Does that makes sense?

Killing a rabbit’ is the next song on this EP, which is a title that as an animal lover (with a imaginative mind!) indeed evokes a picture of great horror in my head. However, music wise GHØS†BØY brings goodness to the table, with a melodramatic guitar loop, electric beats and his voice that shows great emotion over here, really shimmering between a bedroom whisper of honesty, all the way up to soft outbursts in which you can trace some shimmery joy. I mean even though it all seems to be coming from a dark and gloomy place, GHØS†BØY actually clearly enjoys to sing and does that quite sensible and even sporadically popping out as a thing that is beautiful at times.

Than there is ‘coffin in the sky’ which starts nice and moody with a sound that seems to set a growling dark sky, slowly after this quick intro GHØS†BØY starts off his brand of music off and compositional wise it has a fine song structure, dipping into slow pop with excellent sounds, bass, special effects for a moody atmosphere. The sound of the electric accompanying beat and playful guitar forms a really nice palette for the vocals of GHØS†BØY to show themselves on. They form the brighter highlights on this well produced track that keeps the GHØS†BØY sound in the bleak blackness, but clearly has the power and the ability to grab himself up and get out in the sunshine if he wants too! Or at least having the powers to open the curtains a bit! I can clearly hear that GHØS†BØY’s voice is lingering in the dark but has all the capabilities to spread out its wings and become a powerhouse butterfly!

All the way at the end there is the Elvis cover ‘always on my mind’ which GHØS†BØY deliciously took and made it into his own thing. It’s very dark, creepy, warm and powerful in dreadfulness. Not sure if die hard elvis fans would understand it, but I think it sounds great and outshining the original. With its hissing side effects of sound, low laying emo way of singing GHØS†BØY turns the picture of a happy Elvis never leaving the building, into one of Elvis with horns on his head and a red tail; waving at us happily from the warm realm of eternal flames! One day Bill Cosby will dance for him in the fire, but for now GHØS†BØY honours the song with a ghostly makeover! Nice!
https://venusaeon.bandcamp.com/album/disgusting
<KN>