Unfortunately I (KN) couldn’t attend the latest Gifgrond in person, but luckily I had send in a look-a-like reporter who fooled even the hardest loyal inner crowd into thinking that they had me around. It wasn’t hard to pull off, some Jew fro, beak as a nose and a bit naughty on the side. The doors opened immediately for this fake me as he was welcomed with the open arms of a delighted lighted entrance committee consisting of Nick and Boris.

Nick painted a lovable glow in the dark skull on my imposter’s hand – one that he promised to never wash off ever! It’s hard for me to check if he would keep his promise as only blue neon lights will make it appear… oh well, I guess I will have to take his word for it. Just as you will have to take his word if you haven’t been around at the latest gifgrond episode. As here (without further delay) is his report that he delivered to me on my desk – a bit late – but better late than never (he got fired anyway!) …

Hello, fake KN over here! I’ve been going into the first Gifgrond of the year 2020 and was immediately surprised by the buzzing lot of people. I’ve never been in Gifgrond before so I feel less biased and more armed with an eye for detail than the real KN reporter might have been. I enjoyed the decoration, the wires above my head that had a high green toxic glow, the organs and dress up area in which brightly lid graphics had been displayed. One of the Gifgrond insiders (who obviously thought she could trust me), informed that they had been the creative illustration works of Jeroen de Leijer. Not sure if she was correct, but my fake reporter’s nose told me that they looked amazing! 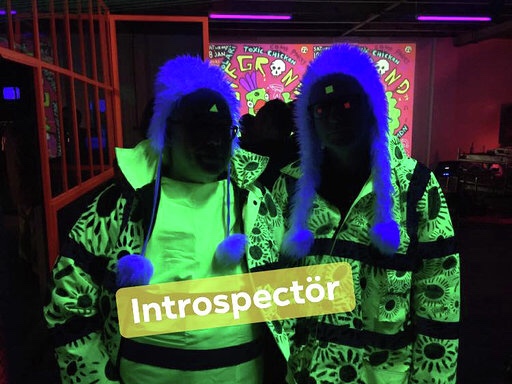 I was just on time as it didn’t take all too long before the first live act of the night ‘INTROSPECTÖR’ started to play. They did this as if they had appeared out of thin air – unannounced and ready to roll! Rumours went around that they where Hans Timmermans & Jeroon The Lyor and indeed that could have been solidly the case. Dressed to impress in black light triggering awesome coats and fuzzy winter hats, the two individuals seemingly stood their ground. With guitar and electronic, voice and disgruntled they glowed in their own world of darkness. Behind them some weird experimental video that could possible have been linked to the audio that INTROSPECTÖR was feeding the speakers. They brought a gothic atmosphere with industrial hardcore kicks and a somber seriousness that many introverted guests seemed to recognise themselves in. People stared intriguingly to what they pushed into the air – cold and loud, stale and moody the INTROSPECTÖR inspected their inner parts by playing it out loud for the busy crowd. 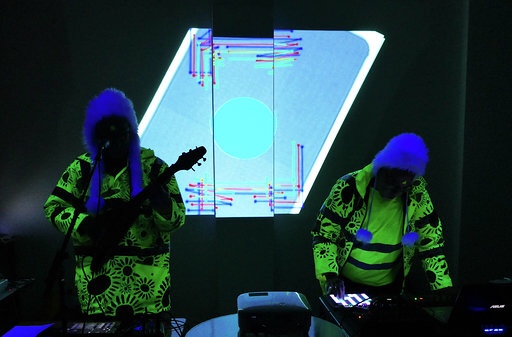 After this it was time to be subdued by a wonderfull and impressive audio performance by collaborative improvisational project HIRVIKOLARI. Personally I haven’t been a fan of toots coming out of a trumpet but the music trip that this band provided completely tossed away my horn phobia! 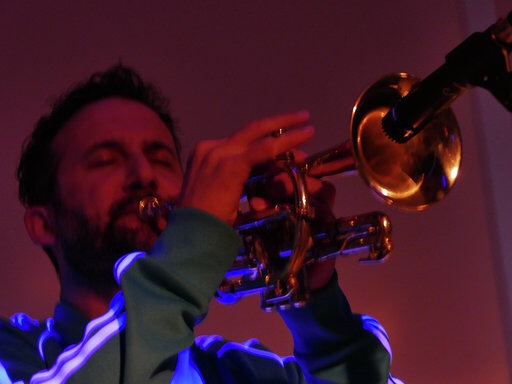 Consisting of Chlöe Herington, Mike Bourne and Samuel Barton and armed with a fine mix of synth, brass, reeds and effects they drew impressively intoxicating soundscapes that had been mostly dreamily (sometimes dark – mostly bright) poking into people’s third eye receptors, but also spoke to the bones of the audience their skeletons inside with a distinctive electronic percussive goodness.

Their trippy ambience went up with the special rhythms for a brilliantly beautiful case of magical music that you could float or hop along with.

The last act of tonight was my hectic employer named Toxic Chicken, who came down riding a chicken, did a manic case of spreading balloons to a frozen audience, tried out his by ‘the doll’ donated mini craptop for a freestyle beep blob.

the chicken attempted to eat a bowl of spicy noodle soup – which turned out too hot for consumption and ended with A ode to the legendary GG Allin without (lucky for us) any poop involved.

People got shaken up and gained back their consciousness from the trippy dream world that the previous act had provided, ready to rock and roll with the incredible deejay skills and sounds of DJ DMDN as the final egg to top this poisonous feast off! 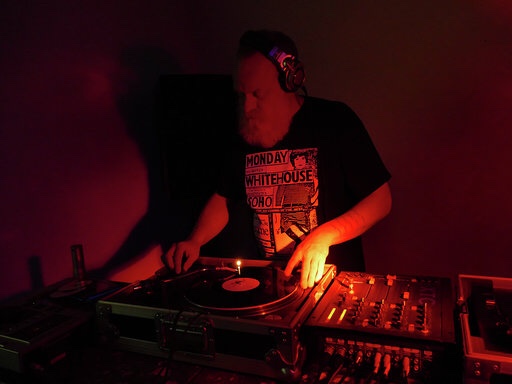 DJ DMDN dubbed ‘the best secret deejay of the world’ smashed it with acidic uplifting beats, electronics and enough energetic bubbles to make everyone go nuts on the crowded dance floor! It was hard to find space to go fully berserk but that didn’t stop anyone! DJ DMDN mixed and matched only the best to great delight of all that attended this successful evening of introverts and extroverts and all that had been mingling in between! Fun fun fun!
http://gifgrond.nl/
<Fake KN>

p.s. Massive thanks to Frank Jansens for the amazing photos in this report!

Special thanks to Toxic Thea and all the gifgrond helpers that made it into a wonderful evening, one that felt like a second home away from home!