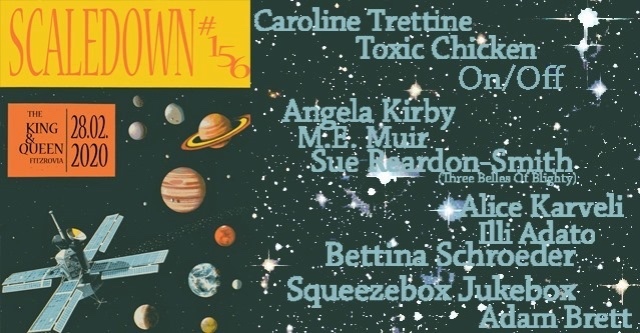 Another month and another slightly undercover evening at Scaledown, this time I decided not to make any pictures (with the exception of one), hoping to not make too much attention to myself and make sure that my cover as a reporter wasn’t blown. When I came in the place it was happily packed, immediately joined the people as they had been staring at the backs of a illustrious duo named On/Off. a name that certainly rings a bell, probably had heard their music before or seen them on Skronk flyers somewhere. As I blended in with the crowd I could take a sneak peek over On and Off (but who is who?) their shoulders and see an enormous screen and even beyond that a projector screen with visuals that reminded me to the good old days in which moving Winamp images had been the hottest things around. Electronic music that suited these visuals came out of the speakers along with a fluted instrument. A thing that either Off or On had been blowing air through to make it work. I had fallen in the middle of it, wandered what their faces would be like and if they could wear masks on the back of their heads to make the show even a little more bizarre than it already was. I stared and listened, looked and heard, settled down and enjoyed On/Off as they had been On.

After this came the only moment that I did have no choice, I had to get the camera out for a picture as this might have been the highlight of the evening right there! Three hot seasoned Chelsea girls in the prime of their life had come down to Scaledown to tell us about their life in their golden days, the clubs that they would hang out, the drinks that they would drink and the men that they would shag, get married too or have test drives with. Non of the men where really good seemed their end conclusion, but these three chicks still got the hotties, clearly poking the audience with enough sharp wit and charming charms that if they really wanted, I’m sure they could go home with a fresh date tonight. Hot hot hot!

I must have been falling in love with these young Chelsea birds as the next act named Squeezebox Jukebox somehow transported me as well to romantic nostalgic days. It must be the sound of the squeezebox itself which might as well be family of the good old reliable accordion. A thing that he played politely and intimately with a background of supporting melodies and noises. It was not only me that drooled upon hearing these emotive wonders of music, I noticed one of the Chelsea girls seated on the front row who was also clearly enjoying it all. Probably squeezing her name card in one of the bags of this artist with a possible handwritten note on the bag saying ‘call me…’. I wouldn’t blame her as this set was wonderful, even my #noiselife friend was juiced up by it & when Squeezebox Jukebox got completely emerged into the moment, opened his mouth and sang… it was like butter melting on the tongue! What a delight to hear!

After this the evening at Scaledown once more showed it’s adventurous side, making way for ex librarian Caroline Tretttine to come in the front to do her thing. She came across as someone who got it all under control, a demanding person who knew what she wants and knows how to get it. With this great personality she delivered expressive words, spoken through her mouth and amplified with theatric body language. She turned the audience into participants of her show, letting them repeat things as if they had been in church for a empowering ritual, a thing that came even more apparent when Caroline asked people to stand next to her as she spoke, turning the poetry into something similar to a magical get together.

After a mini break there was Adam Brett, an artist who through a seemingly simple setup which he used to create a lengthy rhythmic guitar noise trip world in which a video clip of happy twirling cat tail wouldn’t been out of place as the righteous visualisation. In fact that was exactly what my friend had on her phone, making the experience for me the look of a funky moving cat tail and the groovy trap of the music by Adam Brett happily intertwined forever. I couldn’t really see what and how mister Brett was doing what he did, but my undercover guitar friend that had been half in cat tail land and on the front sight of the performance, was clearly well into it and was even seemingly well impressed by it all. A good sign, as he had a good view of the situation, plus he is normally a hardcore critique. I enjoyed the groovy rhythm too although I didn’t have an actual cat tail to swag around to it, a thing I felt now as a thing to do to show my outmost proper appreciation.

With the evening running a bit later than the planned schedule, time wasn’t on the side of the organisers of this episode of Scaledown. After a technical issue and light bulbs being lid, dimmed and put on and off again, a group of three emerged for a overall dreamy improvisation done under the tongue breaking name of ‘Smoke Tongues On steel Wire’. The familiar face of Bettina Schroeder was one of them, but to me the fresh faces of Alice Karveli & Illi Adato where also there to be imprinted in my memory section forever. The trio played a well balanced set in which Betinna and Alice seemed to take on the lively improvised musical harmonics while Illi performed with his voice and face like a character from the ‘One Flew Over the Cuckoo’s Nest’ books, giving the whole thing a extraordinaire performer’s twist, one that felt to me as half balancing in the realms of a pretty dream and half on something that stirred around in the darkness of a shadow world. You could close your eyes and wander around in the visuals that these three would feed the imagination, or you could keep them open and looked at the trio with true fascination as how they actually created this music there in front of you. I chose the last option and got busy staring at the fingers of Betinna as she played the strings, looked at Alice as she blew melodies out of her instrument of choice and observed Illia’s sounds and expressions as if I was Nurse Ratched herself. Interesting!

After this I had to leave my clothes behind on my chair, hoping people wouldn’t noticed that there wasn’t a person wearing them anymore, so I could hopefully still be sure that my undercover cover as me just being a regular member of the audience and a simple participant of the night (and not a die hard opinionated member of the underground press) had been kept in tact. Not sure if anyone noticed it, but just like a caterpillar I left it behind and popped off shoes and socks and acted like the Scaledown floor was a home, safe enough to get the rubber chicken, the craptop, melodica and the cat keyboard out & gladly playing them all at once octopuss-style. I have no idea how it was from the outside experience (I guess I could ask my clothes on the chair but I doubt they would be able to answer) but personally I had a really great time, drowning and experimenting in melodic chaos that would come back on repeat in my dreams later that night. All in all a nice ending of a very surreal and strange night in which it’s impossible to predict what would happen – which turns out to be a wonderful adventurous recipe for the curious at heart that enjoys poetry, music, art and experimentation in a cozy setting in which young and old all seemed to be able to find each other in the middle of it. Don’t know about you, but I would do a cheers to the three amazing humans organising this event and another one on this specific Scaledown episode and than a couple more on the many more Scaledowns that hopefully will appear in the near future! It’s been a blast!
<KN>