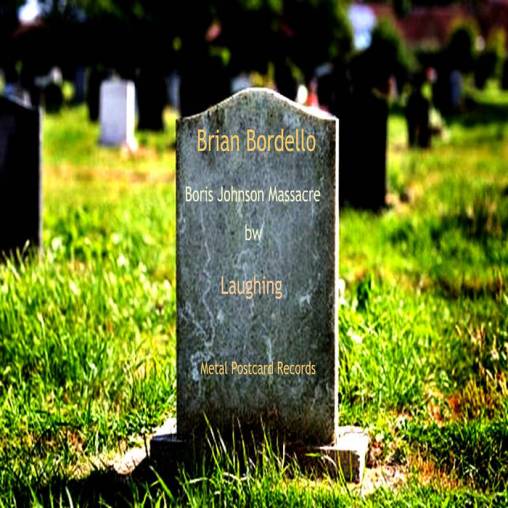 The solo adventures of Brian Bordello are calmly going forward, lovingly done in either the left or the right channel – taking on UK’s most populist clown with the for-the-press-shot woozy haircut and silly moves, while secretly being a puppet with a gigantic Torry fist up his ass. Now that Brian and his brain signs about it, it deems to me that Boris Johnson is similar to Ronald McDonald, the mascot clown of the plastic ‘food’ chain; all foolish and funny – while actually parading in front of an evil empire that even hungry rats wouldn’t want to dig their teeths in.

Even though, we at YIKIS are trying to refrain from too much politics, it is clear and common sense that the calamity named Boris is an asshole, almost too good to be getting special attention by such a excellent composer, singer, musician and writer like Brian Bordello – but there you have it; it’s probably the only good thing that had come out of the whole Boris Johnson ordeal: this song & music – so let’s hope it spreads out like a virus so everyone will hear and love it.

It’s out on Metal Postcard Records and feels (for a protest release) all nice and fuzzy. It’s a 2 track-single that exposes clearly a loving passionate realness in which it’s easy to know who to trust and fall in love with. Brian Bordello slams his guitar and sings from his good heartened soul and realness brave heart over here, which is an immediate stark contrast to the sound of cold psychopathic rulers that only seem to care for money, control and acting imbecilic.

It doesn’t need to be printed on the side of a bus, or have to be lied about, as it so clear that Brian Bordello is always keeping it real, writing confessions from his thoughts, unleashing his sentimental words of honesty – bringing out what has been on his mind & releasing it to the ears of the resistance & doubters that will make them know that they aren’t alone with their thoughts and feels. Brian’s music here makes you for-what-its-worth feel good, even in the most shittiest of situations. It works a true charm!

It solidly gives hope that there are true people out there who don’t have hearts of stones or corporate fists stuck in their asses, not everyone has strings attached to their arms to be moved around like a puppet & that not the whole of UK has been successfully trained in the good dog – bad dog brainwash education system. In crazy insane times like these, it’s crazily enough Brian Bordello who is taking up the unloved part of being the unfiltered voice of reason! Luckily he does this all in the most beloved and kindest ways! Take a listen and fall in love with Boris Johnson Massacre… it’s easy and less deadly!
https://metalpostcard.bandcamp.com/album/brian-bordello-boris-johnson-massacre
<KN>