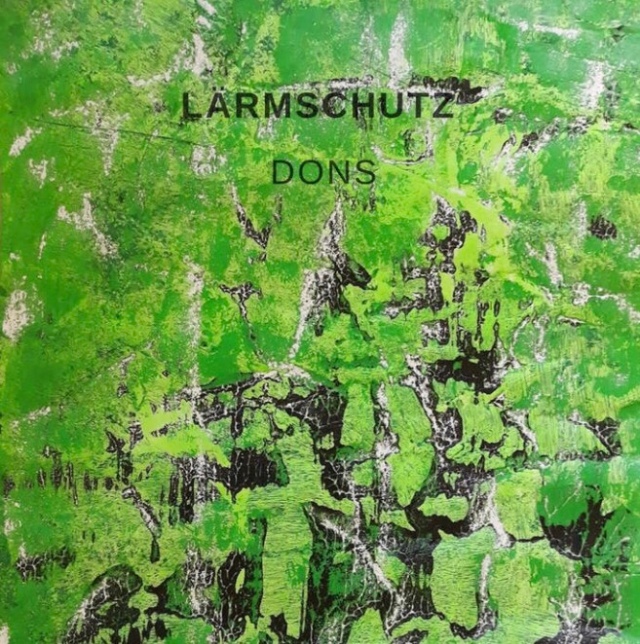 As if the content of a full ashtray had been fallen of a table into a fluffy carpet that hasn’t been hovered or washed since many years. That’s a bit how I feel mostly about Dons by Lärmschutz. A release that sounds more dirty then dirty hairy, and more fuzzy than a hair ball puked out by a overweighted cat that is refusing to take its Ritalin. There is something about it and yet at the same time makes me doubt if there is actually something about it. It brings out the cleaner inside of me, someone who suddenly wants to put on a pair of rubber gloves and some protective clothes to face it all before tossing it gradually into the bin of no return. Hygienic rinsing is the vibe that this dirty work of guitar, rhythm and noise seems to channel to me. If that means that it’s the soundtrack for a big cleanup, or the music itself is inviting me to bathe and scrub it in a shallow bath of cold soapy water is for anyone else to decide… it does certainly make me bubble in nonsensical ways, making me confused in a way that I’m not sure if I love it or love to hate it. Over time I seem to have grown sympathetic symptoms towards it..

So much do that I wouldn’t actually toss it all away, even though some of the unhygienic rusty bits have been hurting my ears and finally my head.. I wouldn’t throw it out of the window, simply because there is a humanity in there, you can hear it saying ‘it’s not what it looks like’ as It sounds like someone who is buried like a hoarder in all that garbage fluff, wanting to be helped out, but can’t get out of its own debris.

it’s seemingly trapped there like a long lost yeti, a vague beast almost never seen, once upon a time spotted in the snow & snapped by a grainy untrustworthy picture, yet now it’s available as a human hoarded up by a fair amount of noise in soundtrack form. You don’t want to get rid of this evidence, even if it’s completely useless, or too pixelated, too distorted, too wild, or perhaps even just unreliable to even touch or sit upon. It’s like the conceptual phrase of ‘something being waste, is another person’s treasure’ had come to life to form a actual ‘music’ statement. We can actually enjoy the banging of drums and it slamming the guitar fields as if they are walls that needs to be taken down, depleted to be freed and liberated. It’s not what it seems’ keeps ringing in my consciousness… could we come together and rescue the person trapped in this release? Do we want to rescue it? Or is it best to keep it contained and leashed on?

I don’t mind it Being there, all nicely tucked away in multiple tracks on the Smikkelbaard side of the bandcamp spectrum. If you need it, you could just open the pandora box and if not; it’s okay to just leave it as it is and move along to hear and view something else. But somehow it feels nice to call upon some super hero and sent it in to save the Lärmschutz before it’s too late. I wonder how the soundtrack is made… Somehow I believe that If you attach your bum fluff to a distortion panel, put some drumsticks in the lower aorta and play it as a electric guitar while high on a peculiar level of self hate , there might be similar responses happening – musically. And to be fair you wouldn’t want to make that kind of recording go to waste either! It’s proof to the court, or any doctor that might be able to free you from responsibilities as you clearly are a person who had taken the lines of insanity and snorted it all up like a cranked up full time mentalist.

I wouldn’t call this recording a international treasure but it is in its own way indeed a treasure. One that is best hidden away at the end of a rainbow or at any other place that’s difficult to find. As It’s simply not for everyone, maybe you need some special kind of glasses to see the charm of it all. (Glasses with strong alcoholic content, probably..) But that’s it; not everyone is a cigar person either, yet the people who are, will huff and puff on those things in fanatic ways until they are all smoked up horizontally in their own coffins. So who knows, maybe some sensible human out there would find a blissful joy by setting up this release, making it play while the sun sits high to annoy the neighbors, until perhaps someone calls the cops to sort out the calls for help that this music seemingly is. But who knows. Maybe they are cool neighbors, who just hop over and start a barbecue as this ‘music’ blurts itself out like a victim that doesn’t want to be silenced anymore! Who knows? Maybe it inspires to get down and dirty yourself, rub ashes in your carpet or roll around in the mud. It’s all good. If you need it, don’t take your meds and head over to this nice mess:
https://smikkelbaard.bandcamp.com/album/dons