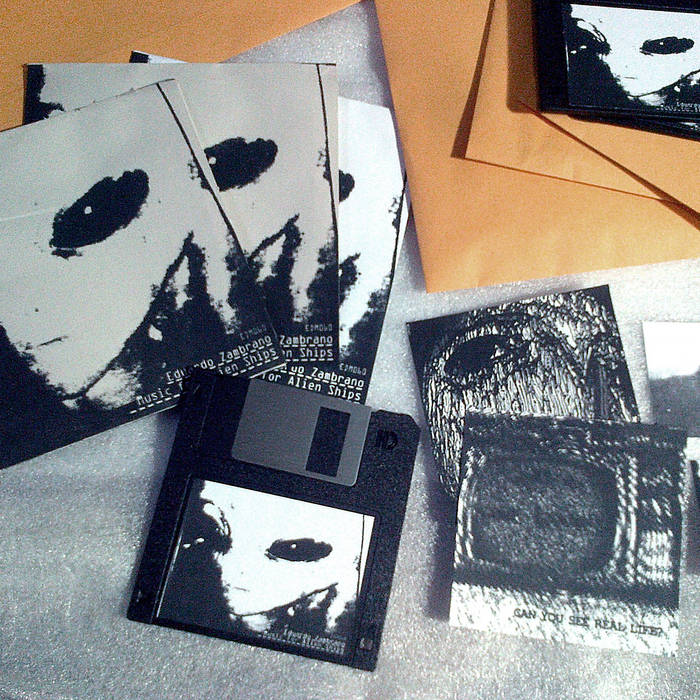 ‘Music for alien ships’ is a wonderful floppy album by Eduardo Zambrano, in which the warm low bit sound is fully coming to life in order to create a very lovely atmosphere. It begins with the very classy openings tune that is so mysteriously named ‘ 010110believe ‘, here the love for electronic melodic programmed music and low encoding becomes unstoppable. The minimal and loving melody is sounding so nice and Chrystal clear that it will probably be every fan of this kind of sound in a fine overwhelming ecstasy.  In fact, I’m experience such a blissful state of mind right now!

The next track on this album brings a scene captured straight out of some pleasant corner in space. It’s a fine nifty scene in which pleasurable miniature sights of low fidelity stars, moons and fuzzy planets can be heard lighting up this part of the fantasized galaxy. It sounds like the place to be, and if Scotty was around you wouldn’t want him ‘to beam you up’ in order to leave this petite but gorgeous scene.

Then of course it’s time for a party! This is the right time and the right place & with ‘spacedisco U’  playing and providing an excellent dance tune, you will be too over the festive moon full of enthusiasm and excitement. This tune drives on an excellent baseline, hot and warm melodies and an all-round magnetic vibe that will make legs flexible dancing things! What a joy!

After all the dancing the album gives us a very pleasant peek in another world named ‘ 01001UFO ‘. This is a soundscape with pleasurable backdrop formations that simply proofs that not all the unknown has to be feared or run away from. In fact this audio world captured here is so lovely, that I wouldn’t have minded if it was twenty times longer: it will save me from hitting the repeat button for at least twenty times.

Then the album gives us a track named ‘1987clackieur’. It is here that for a slight moment I feel that the openings tune of Startrek the first series wants to reintroduce itself. But do not worry, after the imagined happening the soft sounding board engines start to become something different without losing that retro charm of the good old times. The sounds form a tubular melody that brings mystery in a childlike way; it’s an intriguing work and it must be said; a suitable one that paves the way for out of this world pleasant dreams & kind alienating naps. Wonderful.

After this fine world of wonder the release brings us nothing less than the sound of space critters. Unlike Christmas critters this encounter is like having not one but multiple alien encounters at once. These critters do sound like a nice bunch, so no harm will be done in case you decided to snooze off on the pleasures of the previous track.

With ‘aTTack here st5100’ it’s the time that the music prepares the battle ships as it here presents the theme track for galaxy fights with dark baselines, exciting sounds and even mysterious ringing glows of mysterious weapons. This track is filled with excitement and it’s unclear which one of the alien ships will win this battle.

The next track captured on this release is one that consists of signals of peace. It’s not comparable to the white flag of ‘surrender’, but it is far more global sounding. A collection of peace signals that spreads through space ships and among interstellar galaxies in order to calm all the fuzzing and fighting down & restore the happiness of a harmonious space.

The ‘Insane feelings carrousel ‘ is the proper epic tune on this floppy album, going for an synthesizer classic with pretty melodic progression, sounds of choice and slight insane movements. It’s one of those tunes that is destined to be a underground hit! Everything is epic sounding, glorious and graceful and you’ll probably love it!

The last work is ‘mars clogielpia’ and feels like it’s the producer its way to give an open ending & a hint that there might actually be more of these brilliant science-fiction inspired albums in the make! I don’t know if you are a low bit fan, but if so: the discovery of this album is pure gold! Add that this disk comes with a rare bonus midi, stickers, mini hand signed and numbered postcards and a top secret bag, and you’ll certainly know we are dealing here with a ‘must have!’. You can order this disc by mailing edmoonrec@hotmail.com and mentioning the catalog number #EDM060
For the digital one and a sneak preview, you can satisfy yourself at the following link:
https://edmoonrec.bandcamp.com/album/music-for-alien-ships