Posted on September 1, 2016 by kainobuko 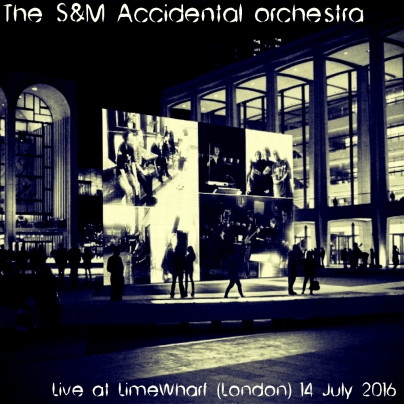 The S&M Accidental Orchestra had recently done a gig in London, for this, one of their prominent members Sean Derrick Cooper Marquardt (yes, this is just one person’s name) had to smuggle itself into the country as the English border police had refused him once entrance on clearly racist means, making him lose out on a previous gig. But this time (with Phil MFu, Marina Young, Michael Forrest, Edmund Davie & special guest Lydia Kavina at the theremin) the band was complete and went on to perform at the ‘Lime Wharf’ like an unbeatable group of experimental mentalists.

For the people who didn’t know or had not been able to hear and see them live, The S&M Accidental Orchestra had luckily managed to record the entire concert. This content is now free downloadable online and has this recording quality that makes you feel like you are following the session while listening through the horn of an old fashioned telephone.

In this lo-fi setting the band seem to flourish and blush with their sound. They bring a case of clear improvisation that needs the musicians to be feeling very comfortable with each other, as well as easily adaptable to each individual’s expressions. Hearing how the collective sound moves through certain chapters, switches their vibes and collectively brings life to their experiments, makes me feel as if they are best friends who had known each other through and through, for many & many years. (Perhaps even light years!) As they are not sounding like just normal human friends, but more like a group of secret aliens pretending to be human life forms, as the actual music sounds pretty much like the material you could visualize to be heard on the cozy side of another planet.

The human audience at the performance is taken on a journey that sounds like a world full of lasers, spacious space noises, avant-garde, psychedelics, sometimes an influential melody; a trip that would clearly transform a London based venue into a pleasant get-together stationed in faraway galaxy. The available real life audience is clearly impressed and gives the sound of great appreciation; multiple hands clapping together! For a listener at home there is no real need to clap, but if you want; nobody will stop you. But first you have to click the link and tune in freely:
https://archive.org/details/SMLiveAtLimeWharf_HCR2016
<KN>