‘The Future Scares Me’ (Sonia & Eli interviewed by KN)

Hi Sonia & Eli, thank you for getting in touch recently and for coming over to the virtual imaginary studio of Yeah I Know It Sucks. You might wonder why we are all here sitting on this cozy sofa today..

The thing is your ‘Play Dumb’ song has been on my mind. Since it entered for the first time into my ears it simply kept on playing in my head at random times and unlike Alan Lauris’s hit song ‘no matching socks’, this obviously catchy track of yours seems to bring a certain comfort instead of lunacy. (Give that ‘socks’ track a shot and you know what I am talking about opposite wise..) It intrigued me enough to invite you two over for a little polite chat. So I’ll hope you are feeling okay over here.

Do you want something to drink? Is there anything you like drink wise?

Sonia & Eli>Yes, we will both take artisanal lattes since we live in Brooklyn.

Alexandria Spaldina! alexandria! Can you please bring me a dragon stout beer and 2 artisanal lattes for our beloved guests? Thank you darling! 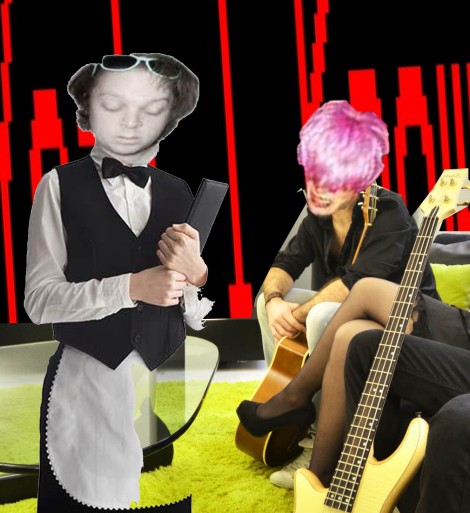 Alexandria listens to what the guests wants to drink

Like most people who perhaps stumble over here as a non expected reader, I really have no clue who you are other than that you must be Sonia and you Eli. It could be the other way around, because that’s how open minded we are around here, but still I guess this is one bit of information that is quite clear.
So ‘Future Scares Me’ is your brainchild, may I ask how you two met and how you found out that you were musically compatible? Was the birth of your brainchild a easy one without complications, or perhaps the opposite?

Sonia>Eli and I met in 2009 at a Jazz Composers Residency in Washington D.C.  Even though we were in a jazz program together, we bonded over our mutual love of rock and pop music and songwriting.  Full disclosure- we started dating and didn’t actually play music together for several years until we started The Future Scares Me.

Eli>Since we were a couple, I think we both initially felt a little reluctant to write and perform music together.  Sometimes it feels a little scary to play music with your significant other.  It took a couple years before we both realized how much we actually wanted to play music together and felt ready to really commit to making that happen.

Can you describe your music style for people that don’t know you and make them burst with curiosity?

Eli>We have a difficult time categorizing our music since we both listen to and are influenced by so many different styles.  If we had to give it an official label though, I’d say our music falls somewhere within the realms of indie pop and synth pop.

Sonia>Yeah, I feel like we have literally spent hours trying to come up with the title that best fits us and at a certain point it just becomes kind of hilarious.  I think most recently we came up with Indie Electro Art Pop which sounds more like a type of candy than a music genre.

I just wanted to say that the words sung in ‘play dumb’ really got to me personally. I had tried to hide it in my review, but I felt touched emotionally by it. Who is responsible for the lyrical content and can you perhaps explain the inspiration behind these powerful emotion-triggering words?

Eli>Thank you!  I came up with a lot of the lyrics when I was imagining what it must feel like to be old and approaching death.  Death still seems like such a terrifying and overwhelming subject to me that I imagine the only way I’ll be able to face it as an old man is by not facing it at all.  That’s where the idea of “playing dumb” came from.  Once I had a rough draft of the lyrics, Sonia really helped refine them until they sounded more coherent and focused.

Sonia>Eli originally had the lyrics written from a first person perspective but I suggested putting them in the third person.  I was thinking less about myself as the narrator and more about someone I actually know who is old- in this case, my grandfather who I’ve always been really close with.

The ‘play dumb’ song video is basically the pair of you (and obviously a camera person filming it all) performing the song live in a crystal clear recording. Personally I think the stripped down approach is the key that makes this song so powerful and catchy, but I’ll ask some questions about that later on.. Now I just wanted to ask for non music making readers what is it exactly that Eli’s foot is doing?

what is this foot doing? asks KN

Eli>I’m playing the bass part with this old bass synth I got from the 70s.  I come from a background in jazz organ where you usually play the bass with your left hand and foot.  This is sort of my attempt to come up with an analog synth version of the Hammond Organ.  Its like an organ for indie pop instead of jazz!

Can you perhaps tell a bit of how you work together as in how you start a completely new ‘The Future Scares Me’ song? What comes first-the musical chicken or the musical egg?

Eli>Hm, that’s a tough one.  I think we’ve found that it’s always a slightly different process for each new song we write.  Sometimes one of us will just have a really tiny idea and we’ll try and develop it together in rehearsal and sometimes it’s more of a situation where one of us writes most of the song in advance and the other helps edit it.

Sonia>A lot of our songs have gone through really different incarnations.  We will work and work on it until we think it’s perfected and finished, only to completely redo it several months later.

I’m not very technical interested in equipment lists and in­depth geeky details as I believe it’s not so much the instrument as it’s the person who plays it that makes the music. Nonetheless, I was wondering what your favorite instrument (music-wise) is and do you also have perhaps a favorite sound?

Eli>I love equipment lists!  I am a HUGE music gear geek so I could easily go on forever about all my favorite instruments and sounds.  But for now, I’ll just say my favorites are my Hammond Organ and Juno 106.  They both have such a warm and classic sound but you can also do so much with them to make them sound personal and different.

Sonia>Since I’m mostly a vocalist I guess I would have to say the voice is my favorite instrument.  That being said, I’ve been having a lot of fun with my TC Helicon which is a vocal processor that I use a lot in our band.

I know this was going to be a little interview, but I always want to know what people’s favorite colors are.. as I feel that colors are so important and very telling character wise. Would you please reveal & share with me and our dear readers what your favorite color is?

Eli>Red, although I wish it were purple because that is Prince’s favorite color.

What is (if any) the animal you feel the closest related too?

Eli>Probably a small and neurotic dog.  They’re really needy but you can’t help but love them, right?…right?!?

Sonia>I’m not really an animal person, but I am neurotic… Is that bad?

The guests are getting a bit neurotic on the sofa

Earlier on I dropped the word ‘stripped down’ as being in my ears the key to making the ‘play dumb’ tune so emotionally charged and catchy. (Even now it is playing in my head..) are you going to keep the song this way or are you dressing it up?

Sonia>Since most of our songs are sonically pretty dense, we like to keep this one relatively simple as a nice contrast.  Even when we play it live, our drummer usually sits out.

I know beats are important to get people dancing, so a drummer is handy for life drumming and sweeping the floor up. But what about a robot drummer that creates bleeps and blobs for a rhythm? I know; I don’t want to mess with the drummer (believe me or not, drummers are the most sensitive human beings out there) but I mean with your futuristic synth sound it would be a great match.. Or perhaps a combination of your drummer as half human and half robot? Just like Robocop but with drums instead of guns?

Sonia>We love robot drummers!  It’s funny you mention that because one of our favorite things is to do is layer a drum machine over the beat that our non-robot human drummer is playing.  It’s not always easy to pull off live, but there’s something really compelling to us about the sound of programmed beats and real drumming happening simultaneously.

Eli>Yeah, I’ve recently been really interested in drum machines.  I’m still learning how to use them but it’s fascinating how many different ones exist and how different they can all sound from each other.

You two are the core of ‘The Future Scares Me’. when you are playing live is it the two of you or is it perhaps (I saw some videos) a full-on band? What can people expect seeing, hearing and discovering your brainchild at a gig?

Sonia>When we first started playing music together it was just the two of us.  However, we’ve performed with both a guitarist and a drummer at different points.  Currently, we perform as a trio with our drummer David Christian, who actually used be my old roommate.  It doesn’t hurt that he happens to also be an incredible musician!

I wonder what the future plans are for ‘The Future Scares Me’ considering that the roads ahead might be frightening. Are you frequently in studios writing new music? Are you working on a EP or an album? Where can we and our hungry ears hear more of your music?

Eli>We’re really excited to be going into the studio next month to record our first EP!  It should hopefully be out sometime early next year.

Thank you so much for this little interview (and your music!) and taking the time to come over to the virtual imaginary YIKIS studio. Do you have perhaps any last words or perhaps a shout out before traveling all the way back to Brooklyn?

Sonia & Eli> Thanks so much for having us and please stay in touch!

The prospects of having a ‘The Future Scares Me EP’ coming in the near future made your host KN, Sonia & Eli smile. A happy ending even though Alexandria Spaldina never turned up with the drinks..