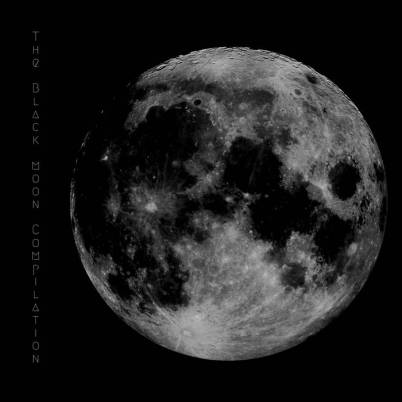 “On September 28th I sent out a general call to anyone who was interested in recording a track on the night of the black moon (September 30th) for release in a compilation. No further recording was supposed to be done after that evening although some tweaking permitted over the weekend with all tracks due to be submitted by October 3rd. From there they were sent to the man behind Purigare for general mastering. You are listening to the result of this work. Thank you to all the artists involved for participating in this first, one day recording compilation.”

When the black moon arrives many artists will wrap their hands together happily, as this might be the night in which blockades of creation are suddenly lifted; making it the perfect moment to dig in, be inspired and most importantly -make music.

The first track is done by someone we had never heard of, a certain Kai Nobuko. His track is the kind of material I would not write about as I don’t want to hurt this artist’s feelings.

Ian Haygreen’s work however is pretty dense and tense. It sounds as if he uses both of his elbows to bang them once and a while on the keys of an authentic piano; this gives the strange atmosphere of darkness a feeling of someone (or something) evil lurking around. Think of thick dark and pretty layers and here and there those distinctive elbows on piano keys moments.

Then there is The Black Hundred with ‘Coffee Hays’, not sure what these coffee hays have to do with the black moon other than that they might have helped the artist to stay awake by sniffing the caffeine out of them. It starts with the introduction of the rhythm, which is pretty nice; it made me think of generation X somewhere in the eighties; the music of a doomed generation. The music gets some very nice massive electric guitar layers on top of them , dropping down the perfect darkness in melody form while a sinister voice sings. The track gets a nice sophisticated touch towards the end, sweetly shimmering in rhythm and mellow melody with one of these baselines that are hard to resist; it all builds up to a pretty ending.

Siphonophore – Cantabo in Nigrae Lunam comes across as a sinister scene of a bicycle maker who is working hard on the chains of a bicycle, even though it’s the middle of the night and even the moon is dark. Hope this person has done candles, a flash light or anything else that would make work more comfortable.

Jim Wylde plays a wonderful little tribute in the dark moon’s honor. It is called ‘In Absence’ and comes across very honest, played from one human soul with minimalistic needs to the grotesque friend looking down from the big sky; Absolutely adorable.

Neal Beard and his Machines – Jerry Fabin’s Lost It is a longer than eight minute music trip, starting with a gracious beginning, then hijacking the ears with a baseline and a fat kick to get your head in a bouncing psychedelic zone. It’s really nice.

Purigare comes with Aknotow which comes with vocals and experimental prettiness, making some kind of mix match of busy things and a spiritual ambience that smoothly waves around like a source for relaxation in the dark moon light.

vANdERlAMP brings the new age space vibe with ‘black moon 16’. It’s the material that with the help of a beat as nice snarling guitars takes the compilation away into another fine headspace. A place that makes us listeners fly, making it as if we are able to hold the black moon in our arms and dance with it. Nothing better than a Superb ending.
https://fallenlo-sounds.bandcamp.com/album/the-black-moon-compilation
<KN>